Who are the Kurds, and why is Turkey attacking them in Syria?

The Turkish invasion of Kurdish-held territory in northern Syria has complicated an already chaotic war.

What began eight years ago as a series of nonviolent protests against the Syrian government morphed into an international conflict, between dozens of local factions, the Islamic State and several foreign countries.

Now, an American ally is attacking a group that fought side by side with American troops for years — and much of the world is reeling from the war’s sudden turn.

Let’s walk through the details of how the Kurds came to be in the center of a dizzying conflict. 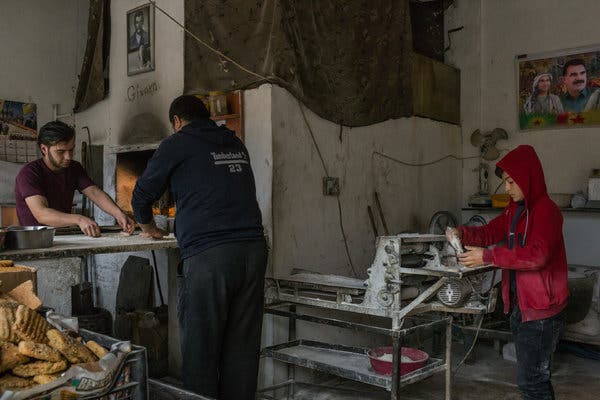 This bakery in Kobani, Syria, had an image of the leader of the Kurdish Workers’ Party.CreditMauricio Lima for The New York Times

How many Kurds are there in Syria?

Kurds are the largest ethnic minority in Syria, making up between 5 and 10 percent of the Syrian population of 21 million in 2011. They live mostly in the north of the country, close to the border with Turkey, alongside Arabs and other ethnic groups. There are also large Kurdish populations in Turkey, Iraq and Iran, but there is no country with a Kurdish majority.

How did Syrian Kurds become involved in the war?

As peaceful demonstrations against President Bashar al-Assad descended into an armed civil war in 2011 and 2012, various factions vied for control of Syria. These included pro-government militias, rebels fighting for a more democratic state, Islamist extremists, and militias from ethnic and religious minorities seeking to protect their areas from attack.

Among them were several Kurdish militias, the strongest of which was the People’s Protection Units, known by its Kurdish initials, the Y.P.G.

How did America become involved in the war?

For several years, the Obama administration resisted calls to play a direct role in the Syrian war, preferring instead to provide funding and training for some rebel groups.

But President Barack Obama changed his mind as the Islamic State took advantage of the chaos of the war to capture vast swaths of Syrian and Iraqi territory.

In 2014, the United States joined an international coalition against the militants, conducting airstrikes and later building military bases on Syrian territory to assist ground operations against ISIS. 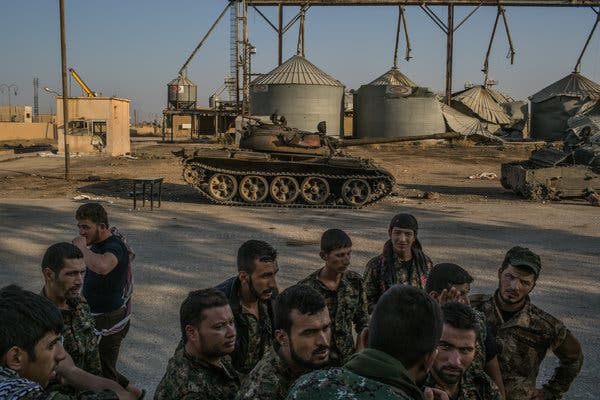 Kurdish fighters in Tel Tamer, Syria, in 2015, near confiscated and destroyed tanks used by Islamic State fighters.CreditMauricio Lima for The New York Times

How did this Kurdish militia become an American ally?

As Islamic State fighters swept across Syria, the People’s Protection Units emerged as one of the few Syrian armed groups consistently able to take on the extremists. When the international coalition, led by the United States, sought local partners to contain the militants, they saw the Kurdish militia as the safest option.

Why do Syrian Kurds control so much land?

As the Kurdish militia gradually forced ISIS out of northern Syria — losing an estimated 11,000 troops in the process — it assumed governance of the land it captured. The militia eventually took control of about a quarter of the Syrian land mass, including most of the border with Turkey and areas mostly populated by Arabs and other ethnic groups.

Subscribe for original insights, commentary and discussions on the major news stories of the week, from columnists Max Fisher and Amanda Taub. 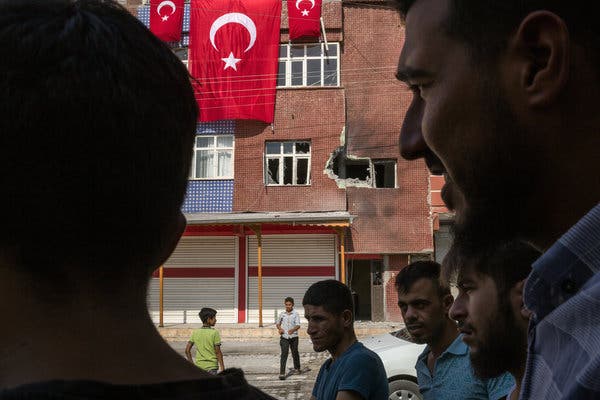 Residents of Akcakale, in southern Turkey, gathered on Sunday in front of a building reportedly hit by a rocket fired from the Syrian side.CreditMauricio Lima for The New York Times

Why does Turkey want to oust them from the area?

The militia is an offshoot of a Kurdish guerrilla group known as the Kurdistan Workers’ Party that has waged a decades-long insurgency inside Turkey. Turkey and the United States consider it to be a terrorist organization.

Turkey sees Kurdish control of an area so close to its border as a major security threat, and fears that the area could become a haven for dissidents fleeing Turkey — or a springboard for insurgents plotting attacks on Turkish territory.

Turkish hostility to Kurdish groups put the United States in a bind: one American ally, Turkey, a NATO member and a fellow adversary of the Syrian government, was eager to crush another American ally, the Kurdish militia that fought on the front lines against ISIS.

How did the United States try to solve this problem?

The Obama administration tried to play down the militia’s connections to guerrillas in Turkey, encouraging the group to change its name and enlist more non-Kurdish fighters. The group is now called the Syrian Democratic Forces, and about 40 percent of its fighters are Arab or from other ethnic backgrounds, according to a 2016 estimate by American officials.

American forces also began to act as de facto peacekeepers, conducting patrols of the Turkish border, first on their own, and then in tandem with Turkish troops.

In recent months, the United States persuaded the Kurdish authorities to withdraw forces from the border and dismantle a series of defensive fortifications, as a show of good will to Turkey. 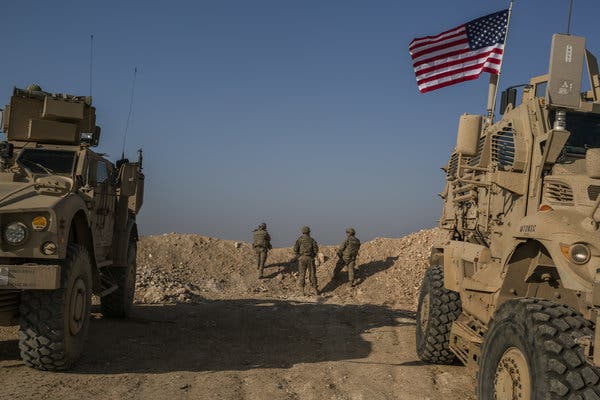 President Trump has long wanted to withdraw American forces from Syria, saying that the United States must avoid “endless wars.” He first ordered a withdrawal in December, but suspended the plan after his defense secretary, Jim Mattis, resigned in protest.

American troops seemed to be in Syria for the long haul, with American commanders assuring their Kurdish counterparts that they would be able to keep the peace in northern Syria for the foreseeable future.

But then Mr. Trump suddenly changed his mind again on Oct. 6 during a phone call with President Recep Tayyip Erdogan of Turkey. Then he ordered American troops to leave the border area.

That gave Turkey open access to Kurdish territory, and a force consisting of Turkish troops and their Syrian Arab proxies began an invasion on Oct. 9.

Initially, American troops withdrew from a relatively small part of the Turkish-Syrian border, redeploying to American outposts in other parts of Kurdish-held Syria.

But amid the chaos of the invasion, in which American troops were almost shelled by accident, the Pentagon has now ordered a complete withdrawal from northern Syria. The retreat will most likely take several days.

A small American base in southern Syria will remain for now.

The Trump administration has threatened to impose economic sanctions on Turkey for its attacks on the Kurds, and on Monday President Trump said that he was halting trade negotiations with Turkey and doubling tariffs on imports of Turkish steel. 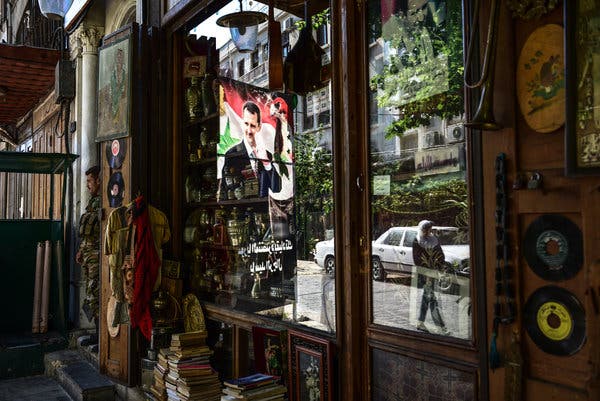 A banner with the image of President Bashar al-Assad of Syria in Damascus in June.CreditMeridith Kohut for The New York Times

Who benefits from Mr. Trump’s decision?

The immediate winners were Turkey and its Syrian Arab proxies, who had captured over 75 square miles of previously Kurdish-held territory by the end of the weekend.

The Islamic State might also profit from the instability, since Kurdish-led fighters no longer have the manpower to root out remaining militant cells or to guard roughly 11,000 captured ISIS fighters detained on Kurdish-held territory. The Kurds also operate more than a dozen camps for displaced families, in all holding tens of thousands of people, many of them the wives and children of Islamic State fighters.

The Syrian government is another beneficiary: On Sunday, the Kurdish authorities allowed Syrian troops to return to large parts of northern Syria in which they had no presence for more than half a decade.

Officially, the Syrian Army will just assist the Kurds in their defense of the area, with civilian life still managed by the Kurdish-led administration. But many fear that eventually the Assad regime, and its feared security forces, will take back control.

Russia and Iran, Mr. al-Assad’s main international protectors, are the other winners.

America’s withdrawal from northern Syria allows the two countries to expand their influence in the region. In particular, Russia has emerged as the main power broker in negotiations between the Kurds, Mr. al-Assad and the Turkish government.