Why dye your hair when you can have it painted? - MyJoyOnline.com

Why dye your hair when you can have it painted? 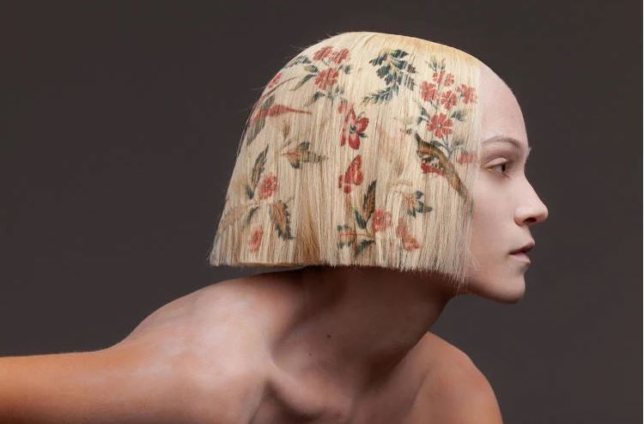 Barcelona-based stylist and hairdresser Alexis Ferrer has spent years developing a technique that allows him to digitally print colorful design onto human hair.

Alexis Ferrer started experimenting with hair printing in 2012, after being asked by haircare brand Wella Professionals to interpret a collection at that year’s International Trend Vision Awards.

The aim was to “was to innovate with a technique not usually used in hairdressing,” and photographic printing on hair seemed like the perfect way to graphically tell a story.

Ferrer’s first attempt managed to get a lot of attention in the world of fashion, and he has been working on refining hair printing techniques ever since.

Ferrer’s first foray into hair printing had him create create blond hair extensions with faces of female protagonists from horror classics like The Shining or Hitchcock’s Psycho printed on them. The models paraded with the hair draped over their faces, and the extensions were fixed with a net to the allow hair to adapt to the movement of the model.

Then, in 2017, for the 080 Barcelona Fashion Week, the Spanish hairdresser teamed up with designer Txell Miras, on a collection inspired by shipping containers and fishermen. This time, he had photographic portraits of bearded fishermen printed on long hair extensions, which was a first in the world of hairstyling.

Then, earlier this year, Alexis Ferrer, showcased the most recent version of his hair printing technique, which now allows him to have colorful, vivid designs digitally printed onto human hair. Although the process was no revealed, the hairstylist described it as “a combination of artisanal styles mixed with technology”.

“I must admit that the first impressions on the hair were a challenge. It took two months to get good results with high definition… Mixing technology with our knowledge of crafts has allowed us to recreate those wonderful patterns on the hair,” Ferrer said in an interview with INFRINGE.

His latest collection of hair printed designs, called ‘La Favorite‘, was inspired by “the best fabrics for the French bourgeoisie during the XVIII century,” and features a variety of Baroque-style motifs, like colorful peonies, butterflies, and birds.

Hair printing isn’t yet available as a commercial service, but it’s definitely proof of the innovation made possible by technology in hairstyling and fashion in general.