Wielding guns in public without permit prohibited by law – Agortey 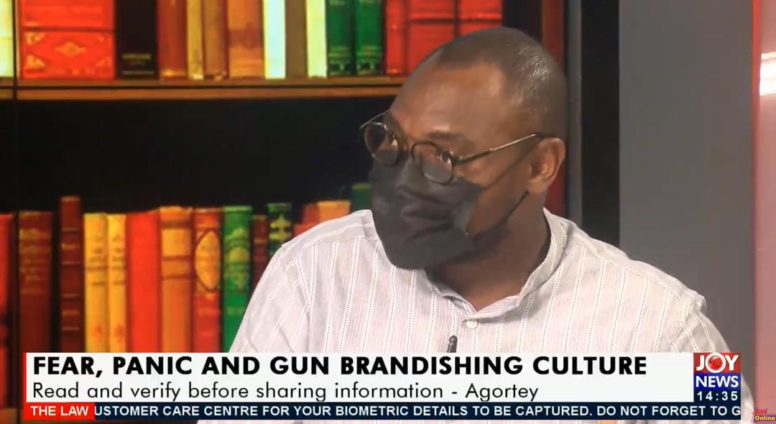 A private legal practitioner, Bernard Agortey has disclosed that persons who flaunt ammunitions without permission or requisite licenses commit an offence and can be prosecuted.

He said individuals who purchase guns and other ammunition owe the duty to ensure that they are legally licensed and registered before they can proceed to use them.

According to him, the purposes for using a registered gun should be clearly defined in a permit which shall be issued by the Inspector General of Police (IGP).

“If you read the law on possession, generally, when you are caught with the prohibited gun, the onus is on you to come and show that you have a permit to use the way you are using it or to hold it the way you are holding it,” he stated in a discussion on The Law, Sunday.

Mr Agortey bemoaned the instances where ammunitions are used for traditional functions without police permits.

He described the phenomenon as worrying as people end up losing their lives because of the indiscriminate use of guns for cultural purposes.

The conversation was premised on the arrest of Ghanaian rapper, Medikal, who was arrested by the Ghana Police Service for brandishing a gun on social media.

“I don’t know why we are now getting here in terms of public discourse on this matter because almost every year, we hear of people dying during festivals or funerals of stray bullets coming from chiefs and people following chiefs all in the name of culture.”

“The law is express that whether it is for ceremonial purposes or for movie purposes, you need a license to hold it. There is a lot of sense in this law because a gun, today, can be a weapon for a movie or even during that movie, it can be the subject matter of a crime,” he added.

Bernard Agortey cautioned the general public to endeavor to verify the information they receive before going ahead to share them with other people.