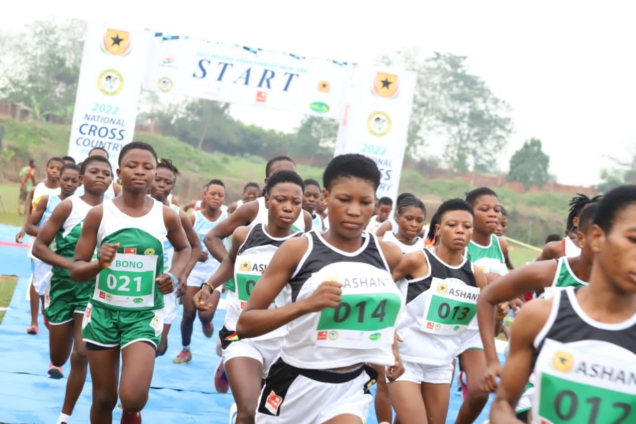 Themed; “running towards 2023” and held at Akim Oda, the 4th edition of the national 10km event saw 192 male and female athletes from all the 16 regions across the country participating.

The race, which ended at the Oda stadium around 8 am, was organised to identify and unearth talents ahead of the 2023 African Games to be held in Ghana.

William Amponsah from the central region put up a spirited performance to beat his colleagues to clinch gold in the men’s category in a time of 28 mins 16 sec.

For the women category; the usual suspect Lariba Juliana Sakat of upper east region overcame a tight challenge to emerge  winner in the women’s category with a time of 35mins 07sec.

Sherifa Moro, a student of Amakwatia M/A in the Ashanti region came second with a time of 35.41sec and Titi Rosina of Upper west region clocked 35.52sec to finish third.

The symbolic starting gunshot which signaled the male athletes into action was done by the Director General of NSA, Prof. Peter Twumasi, while that of the women’s turn was done by Board chairman of NSA, Hon Seth Panwum.

In a spectacular scene during the race, Kuubetegr Diana of Nandom Girls Model School from western north region was the only physically challenged person to take part of the event and her performance drew applauds and plaudits from the audience and the dignitaries who graced the competition.

In his keynotes address, Prof Peter Twumasi, who has led the organisation of the national event for four successful years, called on all the other sporting federations to replicate what the Ghana Athletics Association (GAA) does.

He urged them to organise national events for their respective disciplines.

He assured the people of Akim Oda, President Nana Akufo Addo is firmly committed to ensuring the renovation and completion of the Oda Stadium just like he ensured the development and construction of the other stadia across the country.

He thanked all the dignitaries, officials, athletes and the technical teams for gracing the occasion and also, for contributing their quota to make this year’s national marathon a success.

In his submission during the closing ceremony, the board chairman of NSA, Seth Panwum, congratulated all the gallant athletes for showing agility and strength to cross the finishing line.

According to Hon Panwum, the eventual winners of this year’s competition will be given a Presidential treat where the medals won will rather be presented by President Nana Addo Dankwa Akufo Addo at the seat of Presidency.

He believes, these athletes will form the core of Ghana’s athletics team next year when the West African nation hosts the entire continent in May 2023 for the 13th edition of the African Games.

For the overall regional results, for the female division, Upper West region came first with 21 points, Ashanti region were second with 34 points and Upper East picked the 3rd spot with 47 points.