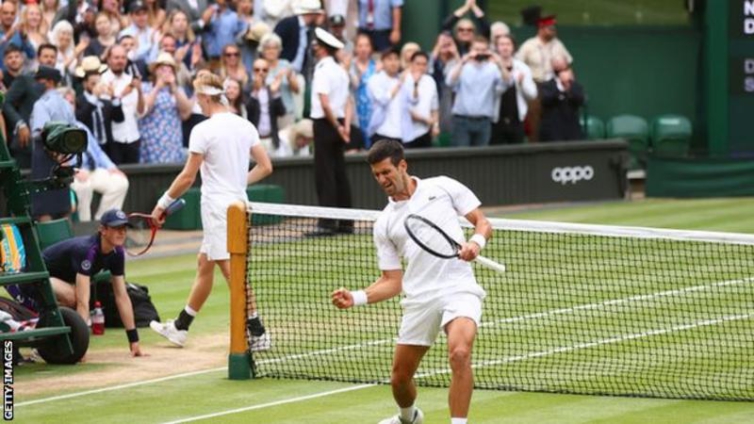 Defending champion Novak Djokovic needed all of his nous and quality to edge past Denis Shapovalov and set up a Wimbledon men’s final with Italy’s Matteo Berrettini on Sunday.

The seventh seed is the first Italian to reach the men’s singles final.

The Queen’s champion used his big forehand and serve to good effect to reach his first Grand Slam final, with Sunday’s showpiece taking place just hours before his nation take on England in football’s Euro 2020 final.

The 25-year-old is the first Italian man to reach a Grand Slam final since 1976.

“I have no words, really,” Berrettini said. “I need a couple of hours to understand what happened.

“I think I never dreamed about this because it was too much for a dream.”

Five-time Wimbledon champion Djokovic is now one more victory away from retaining the crown he won in 2018 and 2019, and therefore equalling the all-time men’s record of 20 major victories set by Roger Federer and Rafael Nadal.

But it was far from a straightforward passage for the 34-year-old Serb.

The world number one needed all of his skill and spirit to see off 10th seed Shapovalov in an entertaining contest which had Centre Court gripped.

In his first major semi-final, Shapovalov did not deliver in the key moments – and that proved costly.

“I don’t think the scoreline says enough about the match, he was serving for the first set, was probably the better player for the second set. He had most of the chances,” said Djokovic, who has reached his 30th Grand Slam final.

“I would like to give him a round of applause for all he has done this fortnight. We will see a lot of him in the future, definitely. He is a great player.”

The left-handed Canadian came out swinging off both flanks, his heavy hitting rocking Djokovic and drawing wondrous gasps from the almost-capacity 15,000 crowd.

He was unable to serve out the opening set or then convert any of five break points – which all came in a 10-minute spell across two service games – that would have seen him take control of the second set.

“Novak does a really good job of putting pressure on when it’s needed, and you feel it exactly in those moments. He steps up. He does that really well,” said 2016 Wimbledon boys’ champion Shapovalov.

Three more break points went begging for Shapovalov at the start of the third set and, although he continued to ask questions, Djokovic always seemed to have the answers.

Plenty of balls continued to come back from the Serb in the rallies and, like in the second set, the pressure again told on Shapovalov as he lost serve for a 6-5 deficit.

With Shapovalov receiving support from a Wimbledon crowd that likes to see an underdog succeed, Djokovic remained steely and serene throughout most of the match.

But the ferocious roar of celebration which greeted the ace that sealed victory illustrated his relief.

In contrast, Shapovalov departed in tears as he received a standing ovation.

“I think what hurt so much this time was just that I felt like the game is there and it’s possible to go and play for the trophy,” he said.

“It’s a feeling I’ve never had before, so that’s why it just hurt so much. I felt like I was outplaying Novak in parts of the match. If you’re outplaying Novak, you can beat anyone.”

Berrettini, 25, had been tipped by many for a deep run at Wimbledon after his displays at Queen’s, where he became the the first player to win the title on debut since Boris Becker in 1985.

It will not have escaped the Italian’s notice that Germany’s Becker went on to win the title at the All England Club that year.

It is not just his power on the serve and a forehand that draws gasps from the crowd, it is also his pinpoint accuracy that has proved a weapon during a smooth passage to the final in which he has dropped just three sets.

Hurkacz, appearing in his first Grand Slam semi-final, had made a confident start with a hold to love in the first game of the match and held off three break points in his next service game before handing Berrettini a break with an tame effort into the net.

That was part of a run of 11 games in a row that the Italian won before Hurkacz, 24, finally held his serve and began to make a match of it by taking the third set to a tie-break that he took early control of.

Hurkacz had the packed Centre Court crowd behind him, initially perhaps more in sympathy when his shot-making had disintegrated. The net worked in Berrettini’s favour and even his Hawk-Eye challenge showed the point was against him by the width of a blade of grass.

They roared and so did he when a Berrettini forehand crashed against the net to take the match into a fourth set and make it a more competitive spectacle.

But 14th seed Hurkacz, who had knocked out eight-time champion Roger Federer in straight sets in the quarter-finals, then went an early break down as Berrettini loosened up and rediscovered his form.

He failed to convert a match point on the Pole’s serve at 5-3 but made no mistake in the following game, where he set up match point with his 22nd ace.

He sealed the victory with another huge serve that Hurkacz could only return long to become the first Italian man since Adriano Panatta at the 1976 French Open to reach a major singles final.

DISCLAIMER: The Views, Comments, Opinions, Contributions and Statements made by Readers and Contributors on this platform do not necessarily represent the views or policy of Multimedia Group Limited.
Tags:
Novak Djokovic
Wimbledon