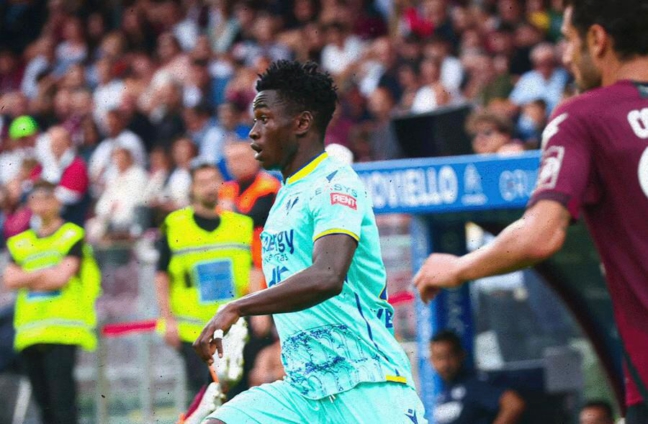 Ghanaian youngster, Ibrahim Sulemana Karikari, was named in the starting line-up for Hellas Verona in the Italian Serie A game against Juventus on Thursday, November, 10.

The budding Hellas Verona starlet should not even be on a football pitch after picking up i jury during his trial with Atalanta through Oliver Arthur’s ArthurLegacy Sports. Chances of ever playing again were limited and he was released by the club.

“Those were tough times for me. Filled with many moments wondering if this was it for me as a footballer he recalls.

Fortunately for him, he had support from his family in Ghana and also his management team at ArthurLegacy.

“It’s quite amazing to see Sulemana enjoying his football again. For most, it’s a big moment for him today to start against a team like Juventus but I see it from a transformation perspective” . What was almost truncated has been fixed through his hard work and the benefits are being reaped. These are the best moments for me as an agent” says Oliver Arthur

Salvatore Bocchetti’s team has not had many bright lights this season in what has been a difficult season so far. Sulemana has been one of the few, paying back the team that took a chance on him to pay for his surgery and recuperate him.

“I spent a full year away from football after my injury, recovering from surgery and then the hard work of getting back into active shape”.

Whatever the outcome of the game against Juventus tonight, Sulemana has come full circle and looks set for a path towards greatness.

The midfielder made his debut for Verona in a league game against Salernitana a few weeks ago.

DISCLAIMER: The Views, Comments, Opinions, Contributions and Statements made by Readers and Contributors on this platform do not necessarily represent the views or policy of Multimedia Group Limited.
Tags:
Hellas Verona
Ibrahim Sulemana
Juventus