Yuichi Nishimura to referee the opening match of the 2014 FIFA World Cup - MyJoyOnline.com 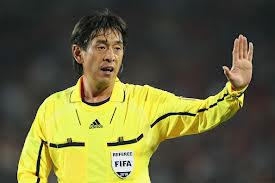 Japan’s Yuichi Nishimura has been assigned as the referee for the opening match of the 2014 FIFA World Cup between Brazil and Croatia on Thursday, 12 June. He will be assisted by compatriots Toru Sagara and Toshiyuki Nagi, with Alireza Faghani of Iran designated as the fourth official.

Nishimura, 42, is set to become the third Japanese referee to have officiated at two World Cup finals after Shizuo Takada (1986 and 1990) and Toru Kamikawa (2002 and 2006). At South Africa 2010 he handled four matches, including the quarter-final encounter between the Netherlands and Brazil.

In addition, Nishimura was selected for the finals of the CAF Africa Cup of Nations 2008.
In 2012, Yuichi Nishimura was named AFC Men’s Referee of the Year.