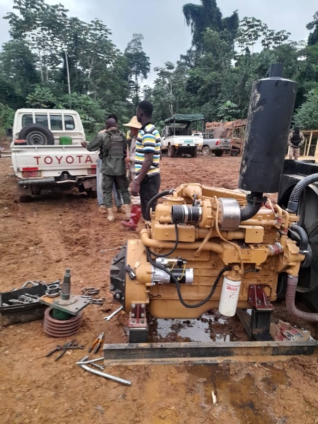 Three Chinese have been arrested for engaging in illegal mining in the Tano-Nimiri Forest Reserve in the Aowin Municipality of the Western North Region.

Another three Ghanaians were apprehended as accomplices of the act popularly known as galamsey.

This was after a successful operation led by the Deputy Chief Executive of the Forestry Commission, Martha Kwayie Manu, and the Western North Regional Forestry Manager.

The suspects were said to have cleared a large portion of the Reserve to facilitate their mining activities.

During the arrest, three pump action guns, a Nissan 4×4 pick up and other items were retrieved from the miners.

The Deputy Chief Executive Officer of the Forestry Commission, Martha Kwayie Manu explained to Adom News how the miners were arrested.

“We got the hint on July 4, but anytime we visited, they were not there. So we were just spying and waiting on them to arrive so that we can apprehend them and that is exactly what we did today,” he said.

She further adviced those operating illegally in the forest reserves to stop as the Commission is set to come after them.

Meanwhile, the suspects have been sent to the Regional Police headquarters in Sefwi Wiawso to be arraigned before court.