A $1.6 billion horror as Ghana investors can’t get their savings

Isaac and Bless Boahen saved for months to fund her economics doctorate, but when the time came to cash in the investment, they were left empty-handed.

The couple are among at least 70,000 investors who have become collateral damage from a cleanup of Ghana’s banking industry. The crackdown, which reduced the number of lenders by a third and saw the closure of 23 savings and loans companies, also triggered a run on fund managers, who couldn’t sell their holdings fast enough to meet demand.

That’s tying up as much as 9 billion cedis ($1.6 billion) of investments, more than a third of the 25 billion cedis in assets that private fund managers oversee for retail and institutional investors.

“My wife was very disturbed,” the 36-year-old said by phone from Kumasi in Ghana’s Ashanti Region. They’re not getting answers and are now worried they’ll never get back the 12,000 cedis they expected back from their investment. “If I knew this would happen, I wouldn’t have gone there.”

They’re in for a long wait. The nation’s markets regulator is looking into whether 21 fund managers violated rules by placing their clients’ money into illiquid assets. The Securities and Exchange Commission has stepped up the pressure, blocking these money managers from accepting new investments for fear they may pay out existing investors. 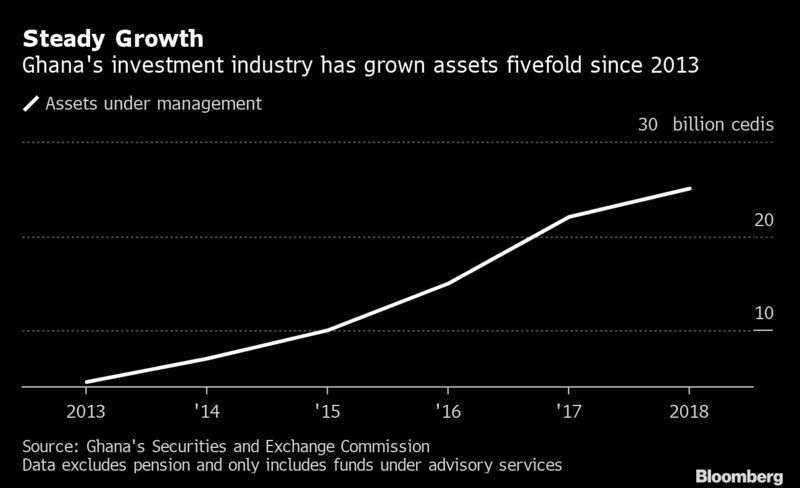 “The harm has already been done,” Lord Mensah, a senior finance lecturer at the University of Ghana, said by phone. “Assets need to be protected.”

As much as 5 billion cedis is tied up in unlisted bonds, direct private-equity stakes and other deals with small- and medium-sized businesses, according to the SEC. Another 4 billion cedis is stuck in fixed-term investments with banks rescued during the clean up, savings and loans companies, and microlenders.

The SEC hasn’t yet released a list of all the fund managers it is investigating. An 11.2 billion-cedis bailout for lenders that were closed down and another package of about 925 million cedis for microcredit companies whose licenses were revoked is helping to release some of the funds locked up in those segments.

“It’s cutting across all the finance houses and when it happens like that the government needs to step in to build confidence again,” Mensah said. “There’s nothing we can do apart from making sure that we create that necessary environment to regain investors’ confidence again.”

That’s of little comfort to the Boahen’s, who were going to use the money to cover the costs of field-data collection for Bless’s thesis with the University of Ghana. After being promised a return of 26% a year on the investment, Isaac, an accountant, had to borrow money against his provident fund.

While he got the loan at a reduced rate of 10% a year, Boahen didn’t want to go the route of raising debt, he said. “It’s costing me more now.”