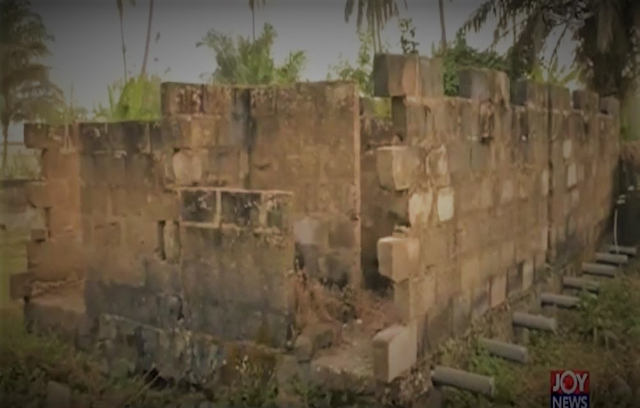 If the stench does not throw you off, your lack of skill to meander through the dotted little mounts in paths will definitely give you a tough time on your commute. This has become the daily task for residents of Kpedze Zongo in the Volta Region, who have had to contend with faecal matter for the past fifteen years.

Many residents indiscriminately make use of the open spaces at odd hours at the slightest edge to attend to nature’s call. Numerous complaints from owners of the landmarks that are usually targeted, mostly fall on deaf ears. Perpetrators walk free almost every night because owners have outgrown the regular chase.

As Kadidja and her sister prepare their family’s supper during a visit by JoyNews’ Emmanuel Dzivenu, she is mindful of the quantity of ‘Akple’ she will eat as she is always subjected to the dilemma of how to complete the digestive process when all is set and done.

“We are now being chased when we go to the bush. We are really struggling. These days my heart beats anytime I have to ease myself”, the visibly distraught lady says while admitting the unhygienic nature of the practice.

Unfortunately, right behind their home is where some households also mostly take solace when they need to ease themselves.

The situation has also left a toll on the health of residents, most of whom are low-income earners. According to Khadija, most of the ill community members are usually diagnosed of sanitation-related diseases.

But who is to blame? Kpedze Zongo, located in the Ho West District, neither has a toilet facility nor portable water, a development that has worsened the unsanitary conditions over the years.

Ghana was ranked second after Sudan in Africa for open defecation in 2017, with almost five million Ghanaians lacking facilities. The country is, however, racing against time to achieve SDG Goal 6 which calls for an end to open defecation, paying special attention to the needs of women and girls as well as those in vulnerable situations while calling for the participation of local communities in improving water and sanitation management.

In view of this, Kpedze Zongo residents are appealing to the government and philanthropists to help complete an abandoned 15-year-old toilet project if sanitation targets would be met.

As it stands, an open manhole in the community serves as a haven for some.

Meanwhile, Head of Environmental, Health and Sanitation Unit at the Ho West District, Stella Kumedzro is kicking against calls for the use of public toilets by residents.
She revealed the rationale behind building communal latrines is to assist individuals in transit to respond to nature’s call in case it happens.

Speaking to JoyNews, Madam Kumedzro said her office will this year embark on a community-lead total-sanitation campaign to get all households within the catchment area build a decent toilet facility. This she believes will help reduce the medical cost of residents.

JoyNews’ Emmanuel Dzivenu sheds light on their plight in the report below.