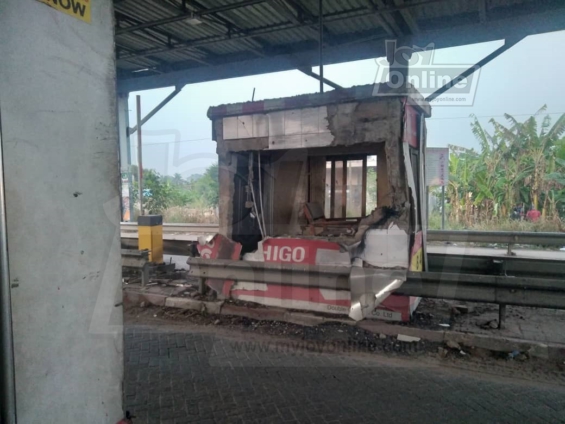 A few months after government scrapped the collection of road tolls, parts of the tollbooth on the Pokuase-Nsawam road have been destroyed.

According to the residents, the damage is the handiwork of drivers who do not exercise caution and crush into the facility while using the road.

They accused heavy-duty truck drivers of being the most culpable.

Reuben Sablah, a resident in the community where the booth is cited, expressed worry that “the trucks, instead of slowing down or limiting their speed when they get here, just speed off and sometimes some of them crush into the tollbooths and cause damage to it.”

A visit by Myjoyonline.com on Monday, February 22, 2022, showed that the asset had been left in a deplorable state.

The said tollbooth lies between Macedonia, and Pobiman bus stops on the Pokuase-Nsawam road.

The extent of damage is very grave. One of the buildings has been completely broken down. Another one, which is adjacent to this, has its concrete walls broken down, exposing iron rods onto the road. All the door hinges have also been broken and stolen by unknown persons, residents say.

The integrity of the structure is compromised. The building could collapse at any time, crashing vehicles, which means integrity assessment must be conducted as soon as possible and restoration efforts undertaken.

This comes months after the government suspended the collection of road tolls on public roads and bridges.

The Finance Minister, Ken Ofori-Atta, announced while reading the 2022 Budget Statement and Economic Policy in November 2021 that government has decided to stop the collection of the toll.

Subsequently, all activities at the booths came to an abrupt stop on the orders of the Roads Minister.

There were concerns about why the tollbooth have not been removed to clear the road for easy passage by motorists.

When asked about the issue, Roads Minister, Kwasi Amoako-Attah, disclosed that processes were underway to convert the abandoned tollbooths into washrooms in various parts of the country.

Later though, he denied making such a claim.

Through its Public Affairs Unit, the Ministry further clarified that contrary to information in the public domain, it does not intend to convert the toll booth facilities to urinals.

According to the Head of the Public Affairs Unit, Nasir Ahmad Yartey, the plan is to create urinals and other facilities where the toll booths are located.

In a statement dated February 16, 2022, he said, “The Ministry of Roads and Highways (MRH) has noted with much concern various discussions on the proposals recently put out by the Minister for Roads and Highways, Kwasi Amoako-Attah (MP), concerning the alternative use of toll booth locations across the country, following the government’s recent policy of suspending the collection of tolls.

“It is important to restate that the reference by the Minister was to the 38 toll booth locations and not the toll booths themselves, which are well over 100 in number. It has become necessary to clarify this position to set the records straight.

“Therefore, the public is advised to ignore the gross misrepresentation of the Minister in his quest to provide information to the public about the government’s plans to find alternative uses for the 38 toll booth locations with over 100 toll booths across the country”, portions of the statement read.