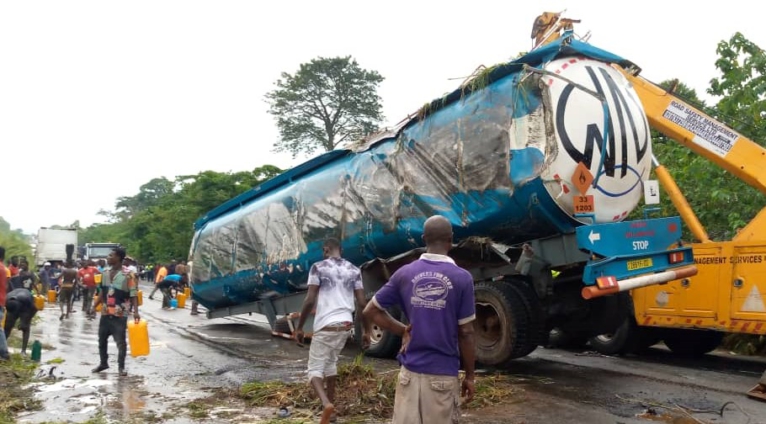 Some residents of Abofour and Nkwaankwa in Ashanti Region thronged the Kumasi-Techiman highway to siphon diesel after a Burkina Faso-registered tanker overturned, covering more than half of the main road.

The residents raced to the scene to siphon the diesel, saying it was a good opportunity given the escalating cost of fuel.

Without fear, they used their gallons and tricycles to cart some of the diesel away.

According to them, “diesel doesn’t explode; so, there’s no reason to be concerned.”

This was, however, contested by another resident who noted that multiple incidents of explosions across the country should have served as a deterrent to them.

In an interview with JoyNews, Nana Adu was alarmed that ignorant persons may fall victim should any misfortune happen, considering the haste with which people rush to such scenes.

“What if it was petrol, and residents rush to steal the fuel?” he wondered.

There was a heavy vehicular traffic on the stretch, following the incident – many commuters were left stranded for about eight hours on Wednesday, June 15.

The tanker with registration 2681F-03, is believed to have suffered a break failure on its way to Techiman.

The siphoned diesel was sold to motorists and other residents who plan to resell for profit.

Police and Fire Service officials visited the scene and diluted the fuel with water to ensure the locals stayed away while the truck was towed.

The condition and whereabouts of the tanker driver were still unknown as of the time this report was published.

DISCLAIMER: The Views, Comments, Opinions, Contributions and Statements made by Readers and Contributors on this platform do not necessarily represent the views or policy of Multimedia Group Limited.
Tags:
Abafour
Ashanti Region
Burkinabe tanker
Diesel tanker
Nkwaakwaa