Abraham Seaneke: When qualifying for the World Athletics Championships meant not being there 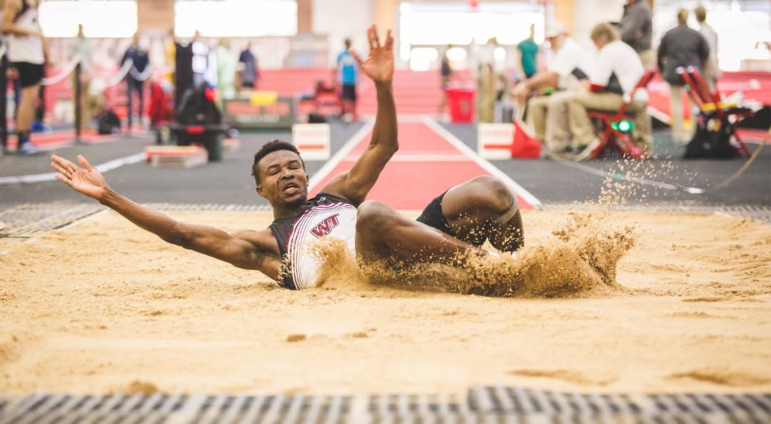 Participating on the biggest stage in Athletics is the dream of every athlete, and even more significant for athletes from these parts simply because of how difficult it is to attain qualifying standards. To put this in proper context, long jumper, Abraham Seaneke would have been the first to represent Ghana at the World Athletics Championship for the first time since Ignatius Gaizer last did in 2005.

“It was an exciting and relieving feeling looking at the struggle and what I’d been through before I made that mark, it was a big relief. I kept believing and I knew my potential. Sometimes I go to meets and I don’t get the results I want but the signs are always there. There’s always something positive to duel on in all the meets that I went to and didn’t get the performance that I wanted,” Sean explained.

Seaneke’s amazing leap of 8.22m (+2.0m/s) at the ECC Club Outdoors event in the United States meant he had secured the exact qualification mark for entry into the 2022 World Athletics Championship in Eugene, but the drama had only begun.

2022 had been a challenging year for Seaneke in so many ways – without an agent – the struggle to find competitions that would give him the opportunity to make the qualification mark was rare. From his abode in Texas to the possible venue were truly expensive round trips to make, as a teary-eyed Seanke explained.

“One time I drove for about 10 hours to Arizona to compete in a meet and when I got there, the competitors were only four and you know long jump situation when you have only four competitors on the field, you don’t have the nod to be able to jump as far as you want.

“Those are some of the challenges I had but I was able to duel on the positives, train hard and go to the next meet. The signs were always there, it just required the right moment and right time for everything to come together.”

While Seaneke was preparing for what was going to be a possible first appearance at the World Athletics Championships, he received a disturbing message from the Ghana Athletics Association (GAA) who were supposed to confirm his participation at the event. The GAA had been queried over Seaneke’s confirmation and apparently, the event he jumped in had some accreditation issues hence his performance was not listed on the rankings by the World Athletics. Seaneke had to face a nervy wait for a positive response from the World Athletics.

The turnaround that never was

For a moment during the JoySports Gold Chase (flagship show to garner financial support for athletes ahead of the championships), it appeared Seaneke’s wish to be at the worlds had been granted. The show featured national long jump record holder, Ignatius Gaizer who upon checking the World Athletics ranking during his submission, realized Seaneke’s performance was back up on the World Athletics portal.

The news was verified on set by the Chief Executive of Ghana Athletics and paved the way for a relieving interview with Seaneke that night, but there was more drama to unfold as he narrated the ordeal.

“I woke up the following morning after that interview with you, and got a bunch of messages that, ‘recheck the World Athletics website, the performance has been taken off’. I was like, ‘Wow! What is happening?’

“I was like, ‘let me contact my agent and let’s see what happened’. My agent told me that the Meet organizer failed to provide some documents to USATF on time for the Meet. But in the previous years, the Meet was sanctioned and my performance reflected on my profile. It’s just oversight.

That meant Abraham Seaneke despite making the qualification mark of 8.22m, was not going to be at the championships in Oregon.

Team Ghana officially announced their contingent for the games and it was just one long jumper in the shape of Commonwealth Bronze medallist, Deborah Acquah, who was going to represent Ghana.

Seaneke told me it was mentally gruelling to watch a competition he should have participated in from the sidelines.

“I watched every jump of it [World Athletics Championship]. It was really hard watching it knowing that you have the potential to make it to the final.

“The long jump is an event that’s anybody’s game; for the past three or five years now the long jump has been very open. Sometimes the favourite that goes into the competition doesn’t end up winning. It’s someone in the final who ends up winning. It’s an event that when it clicks for you, you are going to get a big jump and I’ve realized that everybody has the big jump in them, it’s just a matter of it clicking for you at the right time and everything coming together at the right time; it may be at the World Athletics Championship.

“Watching them and knowing that I have the potential to be in the final, really hurt,” he added.

Back in Texas on the training field where I spoke to him via zoom, Seanake cut a figure who had recovered from the emotional roller-coaster and rearing to go in the coming Athletics season.

“I’m using this as a motivation to psyche myself, using it as fuel and a chip on my shoulder to work hard for next year because of the support system I have. I have been psyched, I’ve been spoken to, I’m over this situation and I’m currently looking forward to preparing for next year; taking it by the day, working on little things to get me in a better shape for next year to be able to hit the qualification mark.”

Seaneke needs an 8.25m leap to make the next World Championships in Budapest next year.