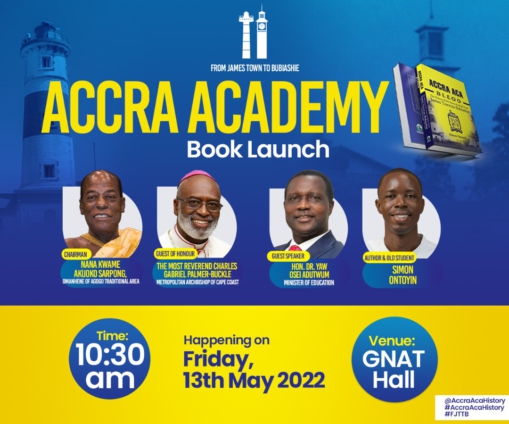 The Guest Speaker for the occasion is Dr. Yaw Osei Adutwum, the Minister of Education. He will deliver a keynote address on the theme: “Greatness from small beginnings – The Accra Academy Journey as an example”.

The Guest of Honour is the Most Reverend Charles Gabriel Palmer-Buckle, the Catholic Metropolitan Archbishop of Cape Coast.

According to Mr Simon Ontoyin, the author and an alumnus of the school, he was inspired to write the book after completing an article about the school on Wikipedia.

The book has been described in generally favourable terms by some alumni of the school who have reviewed it.

Nana Akuoko Sarpong, the Omanhene of the Agogo Traditional Area described the book as not only telling the history of the Accra Academy but also painting a politico-socio-economic portrait of Ghana during that period.

Mr Jacob Korley Okine, the third Headmaster of  Accra Academy, now deceased, in his forward to the book described it as, “An interesting reading for pupils and students of the school, both past, and present, as well as the public, national and international, who are in a position to appreciate the work of the founders and their able support in this yeoman’s work of Education in Ghana.”

Mr. Ebenezer Nii Amu First-Quao, also an alumnus, and a former United Nations translator has also described the book as “Doing justice to the history of the school.”

The launch is also being used to recognise and acknowledge the Buckle Family for providing the school with its first school building (Ellen House) when it was founded in James Town in July 1931 and later with its first boarding house (Claremont House) in 1935.

These buildings sustained the school and ensured its survival until the CPP government built new buildings for the School at Bubiashie in 1961.

The event which is open to the public will be held at the auditorium of the Ghana National Association of Teachers (GNAT) opposite the Ministry of Information building in Adabraka and will commence at 10: 30 am.

The book which is 728 pages is partly an album with numerous photographs and thus presents both a visual and literal history of the school over nine decades.

It recounts the aspirations and achievements of successive administrations of the school and how they overcame the challenges of their time and influenced the character of their students.

It also brings to light several unknown facts about the Accra Academy and examines the educational policies that have influenced its development and growth.

According to Mr. Simon Ontoyin, the book is the outcome of many hours of personal interviews and research and is intended for anyone interested in the history of education in Ghana as a whole.

The book would be available on Amazon in both electronic and paperback versions and would also be available for purchase at major bookstores nationwide.

The Accra Academy is one of the foremost senior high schools in Ghana. It was founded on 20th July 1931 as the first private academy in Ghana.

DISCLAIMER: The Views, Comments, Opinions, Contributions and Statements made by Readers and Contributors on this platform do not necessarily represent the views or policy of Multimedia Group Limited.
Tags:
Accra Aca Blεoo
Accra Academy
Book Launch