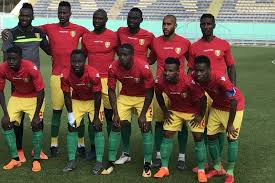 The Syli Nationale have 11 AFCONs under their collective belts, and the journey has brought mixed results. They debuted in 1970 and it did not take long for the side to make a return trip home. Two draws and a loss were not enough to advance to the next round.

Guinea had another shot in 1974 in Egypt and narrowly missed out on the chance to advance to the next round with a slightly better record of 1 win, 1 draw and 1 defeat.

The next tournament two years later, however, was a massive success. Guinea managed to take the silver medal with Morocco coming out as winners.

The National Elephants have failed to make it past the quarter-finals since then and the team will hope to break that curse in Egypt.

A dark cloud hung over Guinea after 1980 AFCON tournament in Nigeria. The players did not have the chance to showcase their talent in subsequent AFCON competitions due to their failure to secure qualification.

The cloud stayed till 1994, 24 years after their last appearance. Their return did not last long after losing two straight matches and making the early trip home.

The National Elephants did enjoy some success in the early 21st century, booking a place in the quarter finals in 2004 and losing 2-1 to Mali. Guinea repeated their 2004 achievement in the next two AFCON tournaments. They were beaten by Senegal (3-2) and Ivory Coast (5-0) in the 2006 and 2008 editions respectively.

Guinea has had some struggles in qualification in recent times and that is highlighted in their 2 out of the last 5 appearances in the AFCON tournament. This has hurt their standings among African countries and the world. Guinea is currently ranked 13th in Africa and 71st in the FIFA rankings.

Coach Paul Put will be looking to improve that with his tactical knowledge. Paul has managed multiple countries in Africa including Gambia (2008-2011), Burkina Faso (2012-2015) and Kenya (2017-2018). He moved to Guinea in March 2018 and has helped guide the team to Egypt after missing out on the recent past AFCON competition.

Sadio Diallo has been ruled out due to injury. Paul will have a tough task of setting up his team without a key midfielder.

Who is in their group?

Guinea will battle Nigeria, Burundi and Madagascar in Group B.

How have they fared against those teams in the past?

The match between Guinea and Nigeria will temporarily decide the better side. Both have beaten each other 5 times and have drawn 7 (5W 7D 5D). Guinea are yet to lose to Burundi in three games (1W 2D), a record they will want to maintain. The National Elephants are also unbeaten against Madagascar, winning once and drawing another.

Naby Keita will be tasked to make the difference for Guinea. The all action midfielder was part of the Liverpool team that clinched the Champions League trophy last season and will hope to lead his side to success. Naby has scored five for Guinea so far and will look to add to that tally. He comes into this tournament with the threat of an injury hampering his effectiveness. Will he be fully fit?

Amadou Diawara is a player to watch in Egypt. Diawara’s ability to break attacks expertly at such a young age (21) is one of the reasons Napoli signed him in 2016. This tournament may be his big break in African and world football.

The Conakry Grand Mosque, in Guinea’s capital, was built under the country’s first president, Ahmed Sékou Touré, with funding from King Fahd of Saudi Arabia. It opened in 1982. It is the fourth largest mosque in Africa and the largest in Sub-Saharan Africa.

The etymology of “Guinea” is uncertain. The English term Guinea comes directly from the Portuguese word Guiné, which emerged in the mid-15th century to refer to the lands inhabited by the Guineus, a generic term for the black African people who lived south of the Senegal River.

Guinea are likely to be one of the two teams to make it out of the group to the next stage. Paul Put has good talents at his disposal and a quarter-final berth can be achieved with them.