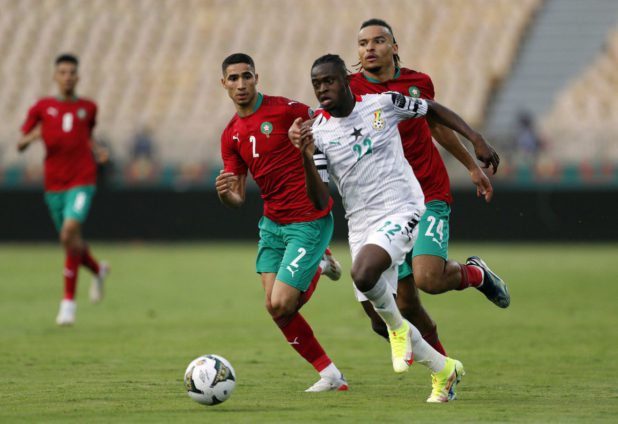 Ghana did not have the best of starts to the 2021 Africa Cup of Nations after suffering a 1-0 defeat to Morocco in their opening game at the Ahmadou Ahidjo Stadium.

The Black Stars, who were confident of victory ahead of the game were made to pay for their ineffectiveness on the pitch as Sofiane Boufal scored the only goal of the game to give Morocco all three points.

Milovan Rajevac named a strong starting line-up for the game against the Atlas Lions, as Kamaldeen Sulemana, Joseph Paintsil and Thomas Partey were all given starting berths.

Morocco, despite having to deal with some absentees also presented a strong team to face the west African side.

Ghana started the game as the stronger side as they saw more of the ball in the opening exchanges until the 15th-minute mark when their opponents grew into the game.

With chances coming very little in the way of both teams, Morocco recorded the only shot on target in the first half after Ghana’s Joojo Wollacott was forced into a good save by Selim Amallah.

The pair went into the break with no goal separating them but it was Morocco who looked to be playing with more intent of winning as managed five shots at goal compared to Ghana’s two.

After the recess, Vahid Halilhodzic’s side continued from where they left off before the end of the first period of the game.

However, Ghana sat a bit deeper as they looked to soak the pressure and hit the Atlas Lions on the counter attack.

But for an excellent save from Morocco shot-stopper, Bono, Paintsil would have given the Black Stars a vital lead. But the Sevilla goalkeeper made a good save to keep his side in the game.

Andre Ayew also came close to putting Ghana ahead but his header from close range was too feeble to beat the goalkeeper.

However, with seven minutes to go until full time, Morocco surged forward on the left side of Ghana’s penalty area through Achraf Hakimi, whose ball into the path of a teammate put Ghana’s defence in a messy situation as Boufal pounced on a failed attempt to clear the ball.

There was very little for substitutes Abdul Fatawu Issahaku, Daniel Kofi Kyereh and Richmond Boakye to do as the Atlas Lions walked away with all three points.

The game was also Ghana’s 100th game in the continental showpiece, a feat shared with Egypt.

Gabon also defeated Comoros in the other Group C game with Aaron-Salem Boupendza scoring in the 16th minute.