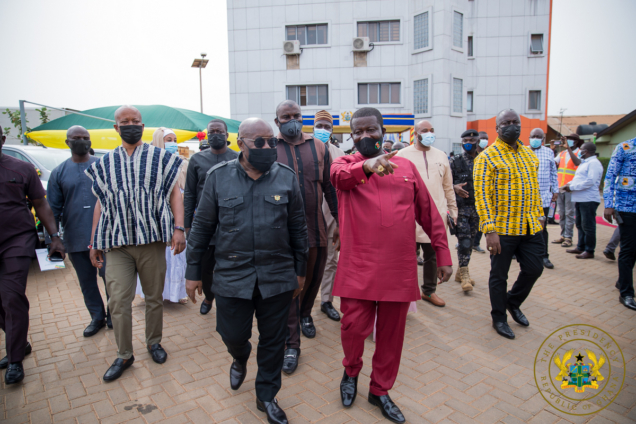 The tour will enable the President commission completed projects, inspect ongoing ones and interact with traditional authorities within the area.

President Akufo-Addo will attend the official opening of the NPP National Executives and Directors Training and Orientation Conference at Rock City in the Abetifi constituency and hold an interview session on Rock City Radio.

He will then proceed to Nkawkaw to inspect the construction of the Nkawkaw-Abirem-Ofoase-Akim Oda road project.

President Akufo-Addo will later pay a courtesy call on the Chief of Ofoase, inspect the construction of the Ofoase-Ayirebi Agenda 111 Hospital Project and depart to Akyem Asuboa in the Asene Manso Akroso constituency to inspect a similar project there.

Day two of the tour will begin with the commissioning of a 1D1F Beverage Factory, a 24-Unit Classroom Block at St. Martins SHS, as well as an accommodation complex inside the Nsawam Camp Prison, all in the Nsawam-Adoagyiri constituency.

President Akufo-Addo will then proceed to Kwabeng to inspect work on the Agenda 111 hospital project and the Buntaa Farms.

He will continue to commission the Model STEM Senior High School and the Abomosu bridge, as well as inspect the Abomosu Polyclinic in Atiwa West.

The final day of the President’s tour will begin in the Abuakwa South constituency with the inauguration of the Archdeaconry at St. Mark Anglican church in Kyebi.

He will proceed to the Yiadom Hwedie Palace in Koforidua to pay a courtesy call on the Omanhene of New Juaben Traditional Area, Daasebre Kwaku Boateng III, and commission a 24-Unit Classroom Block at Pentecost Senior High School.

He will commission the newly constructed New Juaben South Municipal Assembly in Koforidua to end the tour of the region.

DISCLAIMER: The Views, Comments, Opinions, Contributions and Statements made by Readers and Contributors on this platform do not necessarily represent the views or policy of Multimedia Group Limited.
Tags:
Akufo-Addo
Eastern Region