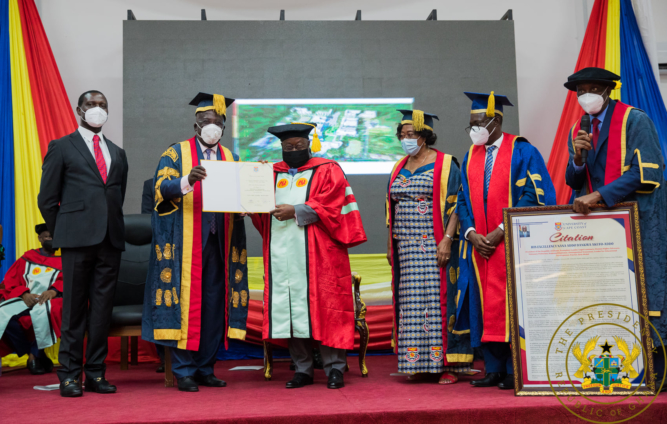 The President of the country, Nana Akufo-Addo has received an honorary Doctor of Philosophy in Educational Leadership degree from the University of Cape Coast (UCC).

During a special congregation ceremony held in his honour at the University yesterday, the Vice-Chancellor of UCC Professor Johnson Nyarko Boampong described the implementation of the Free Senior High School (SHS) policy as a “bold and decisive policy” taken by the president.

“One of the boldest decisions taken by H.E. Nana Addo Dankwah Akufo-Addo as president was to introduce the free Senior High School policy in September 2017 despite the huge financial implications on the economy and uncertainties shrouding the concept at that time.

“However, his resilience and inspiring leadership have contributed largely to the realization and continued success of the Free SHS policy,” he stated.

Among the many highlights of the policy mentioned by Prof Boampong is the fact that “over the past 4 years, more than a million graduates from the Junior High Schools have benefited from this policy”, emphasizing that the payment of school fees is now no longer a “barrier to any child assessing SHS education in Ghana”.

Calling it “iconic”, the VC stated that Free SHS is in fulfilment of Goal 4.1 of the United Nations Sustainable Development Goals and has attracted the admiration of other African nations within the sub-region who “are now beginning to study Ghana’s model with the view of replicating its success”.

He added, “The recipient’s leadership and transformational leadership is seen in the introduction of the flagship education policy. In my view, it is not only intended to increase access to education but also as a tool for social and economic transformation of our dear country,” he added.

Receiving the award, the President lauded the achievement of the policy since its implementation and promised to uphold the highest standards associated with the award.

“This accolade is being conferred on me because of the introduction and acceptance of the Free SHS policy promoted by my government, which has expanded dramatically access to education; enabling hundreds of thousands of young men and women from all corners of our country to go to Senior High School.

“The Policy has reversed decades of exclusion, which denied on the average, 100,000 young men and women annually, entry to Senior High School education because of the poverty of their parents. The nation can now begin to reap fruits of the talents of all its young people as has been spectacularly demonstrated by the outstanding results of the first graduates of the policy in the most recent WASSCE examination,” he stated.

According to the president, not only has access been widened, the quality of education at the SHS level has been maintained and “enhanced”.

He also promised that government will ensure that access to tertiary education is expanded “through the removal of the guarantor requirement that makes it difficult for some students to apply for loans through the Student Loan Trust Fund Scheme”.

Further to that, he stated that if Ghana should make the rapid transformation of its social and economic life, access to education should be the bedrock of its policies.

The Chancellor of UCC, Dr. Sam Jonah described the president’s contribution to the country’s educational sector as “outstanding” and the “most momentous decision taken by any leader of the country”.

“This policy has expanded access to Senior High School and paved the way for many young Ghanaians who otherwise would not have been able to afford SHS education. The financial burden lifted off some parents and guardians cannot be overemphasized. Without a shadow of a doubt, the free SHS policy is a bold decision and one of the best social intervention policies ever taken by any leader of this country,” he emphasized.

Present at the ceremony were Central Regional Minister Kwamena Duncan, Minister of Edcuation Dr. Yaw Osei Adutwum and many others.