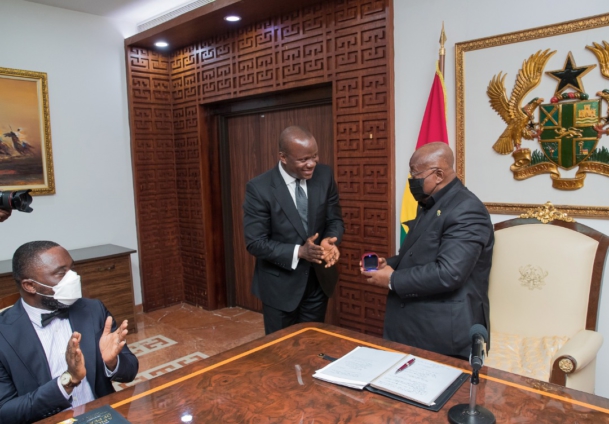 President Akufo-Addo has been presented with the Otumfuo Commemorative Gold Coin.

The Lands Minister, Samuel Abu Jinapor, led a delegation from E ON 3 Group – the organisers of the launch of the gold coin; and their key partners to the Jubilee House on Thursday, January 27, to present the gold coin to the President.

According to Mr Jinapor, the gold was procured, refined and minted in the country.

On his part, President Akufo-Addo commended Asantehene Otumfuo Osei Tutu II for his peace initiatives.  He also noted that it is refreshing that value has been added to Ghana’s raw material; gold.

“More grease to your elbows,” the President said whiles commending E ON 3 Group for the initiative and also for presenting the gold coin to him.

The Bank of Ghana gave authorisation to E ON 3 Group to mint the gold coin to celebrate Otumfuo Osei Tutu II for his tremendous role in peacebuilding and national development.

Below are more images from the meeting: