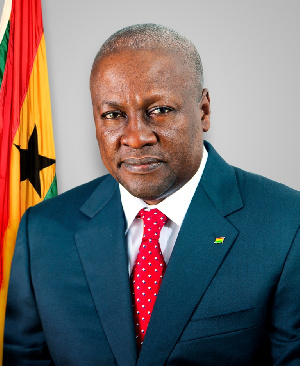 Former President, John Dramani Mahama, has described the Akufo-Addo regime as ‘the greatest political scam in the 4th Republic’.

According to him, this is due to the unprecedented economic challenges in the country.

Speaking at the Lawyers’ Conference of the opposition National Democratic Congress (NDC) on Sunday, Mr Mahama said President Akufo-Addo and his Vice, Dr Mahamadu Mahamadu, must be squarely blamed for the current economic hardship in the country.

Lamenting the prevailing economic condition, he however touted the NDC’s ability to make things better in the near future.

“Ghanaians are looking up to the NDC to restore hope and turn the fortunes of our motherland around from the pitiable state in which we currently find ourselves. At this time, Ghana our motherland is in deep crisis. Our economy is in a dire situation”, he said.

Mr. Mahama added, “Our economic fortunes deteriorate with every passing day. Ghana is facing an unprecedented economic tailspin of runaway inflation, which is currently measured at above 30%; [and] a fast depreciating currency”.

The comments of the former head of state come at a time when the Ghanaian economy appears to have taken a historical dip in terms of its viability and ratings.

The country’s currency, the Ghana Cedi, has in recent times sharply depreciated against the US dollar in what many businessmen, including the Ghana Union of Traders Association (GUTA), have described as ‘unfortunate’.

Drivers and car owners in the country are also distressed by the increasing cost of fuel prices; a situation which they say is negatively affecting their profit margins.

But in the face of these hurdles, the Chair and Managing Director of the International Monetary Fund (IMF), Kristalina Ivanova Georgieva-Kinova, says her outfit is willing to assist Ghana to put the country’s economy on a better footing.

The Bulgarian economist made this known in a tweet on Friday, August 26, 2022.

According to her, the IMF’s decision to support Ghana stems from a ‘constructive meeting’ she had with Finance Minister, Ken Ofori-Atta and his team.

The meeting, she disclosed bordered on the challenges of Ghana’s economy and how to address them.

“Constructive meeting with [Ghana’s] Finance Minister Ofori-Atta & his team on Ghana’s economic challenges and the way forward. We are ready to do our part to help the authorities stabilize the economy, lay the ground for stronger growth & help the most vulnerable”, the tweet said.

DISCLAIMER: The Views, Comments, Opinions, Contributions and Statements made by Readers and Contributors on this platform do not necessarily represent the views or policy of Multimedia Group Limited.
Tags:
Akufo-Addo
Dr Mahamudu Bawumia
Economy
IMF
John Mahama
NDC