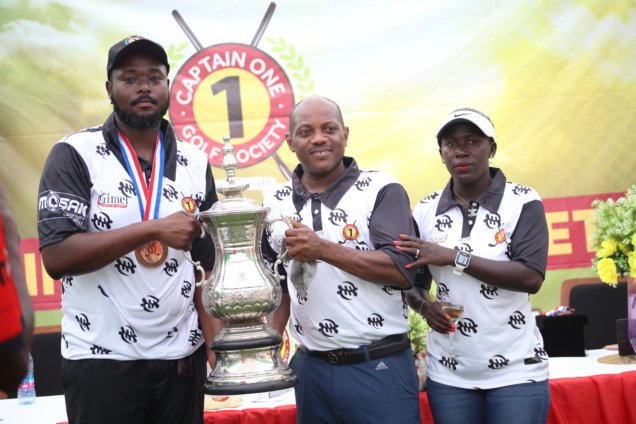 The enterprising golfer from the Nsuta Golf Club dethroned his club member, James Akwaboah (last year’s winner) to take the ultimate trophy after the two-day competition which saw over 100 golfers participating.

“it feels good. I am really excited with the whole game. I didn’t have it easy on the course. It was determination so you don’t give up on the game. That’s what helped me, I never gave up.

It has been a good organisation because playing with the professionals is not easy so me finding myself as the winner among professionals in Ghana, I feel so proud of myself.”

He added that he will try and defend the trophy come next year.

“Well, It is not easy to retain a trophy but I am going to practice a lot and make sure even if I don’t emerge as a winner next year I should come very close to the trophy.”

Craig Tandoh recorded 142 points over the two days to clinch the topmost prize to beat Felicity Okyei-Bonsu who surprisingly gave the men a run for their money.

The experienced golfer became the only female to enter the top three position since the Captain One Charity Championship began six years ago.

She recorded 146 points ahead of Maxwell Owusu-Bonsu who had 148 points to settle for the third position.

The Prizes
The overall winner received a giant trophy, gold medal and a cash voucher of GH¢5000 whiles the second position had a GH¢42500 voucher, silver medal and a trophy with the third position also taking home a trophy, bronze medal and GH¢1500 gift voucher.

Lesley Boakye Yiadom won the Longest Drive for the men’s category on day one of the event while Vivian Dick won the Lady’s Longest Drive.

Longest Drive for day two was won by Kwabena Poku and Flora Hurtubise for both men and ladies respectively.

George Antwi won the closest-to-the-Pin award on day one, and day two went to Boakye Yiadom.

The Seniors event was won by Seth Bekoe Apeadu while Philip Andoh settled for the second position.

Speaking at the closing ceremony, the President of the Captain One Golf Society, Mr Pius Ayeh Appiah commended golfers for showing up for one of the most competitive golf events in the country.

“Most interesting is the fact that an amateur golfer has won the event, equaling the number of times the professionals had won it-three times each,” he stated.

That he said, was the idea behind the events which would provide the platform for all golfers, from professionals, amateur as well as kids to exhibit their talents.

He said, the kids had also developed massively and showing great skills on the course, adding that they would soon produce one of the best golfers in the world through the Captain One initiative.

He urged other companies to come on board to develop golf and ensure Ghana became a major force in the sport. He also expressed appreciation to the Royal Golf Club for their support.

DISCLAIMER: The Views, Comments, Opinions, Contributions and Statements made by Readers and Contributors on this platform do not necessarily represent the views or policy of Multimedia Group Limited.
Tags:
Captain one charity tournament
Craig Tandoh
Nsuta Golf Club
royal golf club