An old pauper’s wish: ‘I want to lie on a mattress before I die’ 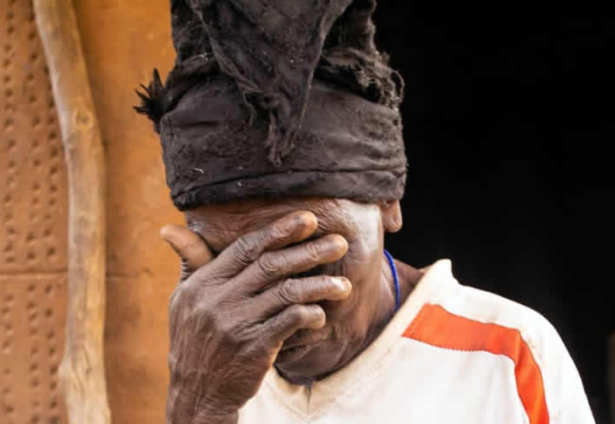 You may have an earnest dream to build a mansion or drive a posh car before you depart from earth but an old lady, Yaya Kwanjit, in a deprived community of Saanbona in the North East Region has just one dying wish: to lie on a mattress.

Kwanjit does not know her age, yet she firmly maintains that she is younger than she looks currently. She blames poverty for draining all her youthful juices – leaving her blind and old.

She lost her sight after giving birth to her second child. The blindness, she believes, would not have suffered if she had money to take good care of herself.

The old lady who craves ‘banku, rice with fish, koose, to drink malt and other drinks’ says ‘I have no means. This is what I consider as poverty.’

According to her, two of her sons travelled to the southern part of the country in search of supposed better living conditions but only one visits her occasionally. Her other son, however, has never returned. But Kwanjit harbours no hard feelings as she blames his long absence on poverty.

‘My son was very young when he left. This community is very poor so he had no choice but to leave.

‘I heard he had a family down south but he has never contacted me. I don’t blame him I know life is hard down south,’ she said.

With no one around her, she is left to battle life alone. She gropes for her stick and does virtually every domestic chore herself. On a typical day, she lights a fire and prepares ‘tuo zaafi’ with ‘okro’, a food she has grown tired of eating but has no choice.

“Sometimes I want to drink malt, eat banku and other meals but I can’t afford”, she added.

She said the children in the community support her by fetching water and doing other things for her.

She plants some crops for subsistence and periodically gets maize and other cereals from her son and sometimes people in the community.

But there are also days that Yaya Kwajit goes without any food.

‘Sometimes, the people in the community assume I am okay. There are days I have nothing but water to drink. God always sees me through’, she said.

According to UNICEF Ghana, there are, however, an estimated 750,000 more poor Ghanaians who are not beneficiaries. Yaya Kwanjit is one of them.

She is aware of the LEAP Programme and knows some members of the community where she lives who are given the cash handouts and would wish to be added so she could meet some of the bare necessities of life.

Kwanjit’s National Health Insurance card has also expired and so she does not attend the hospital when ill because she cannot afford it. Although she is thankful to God for good health, she wants her health insurance card renewed.

According to her, she has been sleeping on the bare floor all her life and rarely sleeps on a mat.

Yaya Kwanjit’s last wish before she dies; ‘I want to sleep on a mattress…now I don’t even have a mat…the only thing I want is a mattress’.