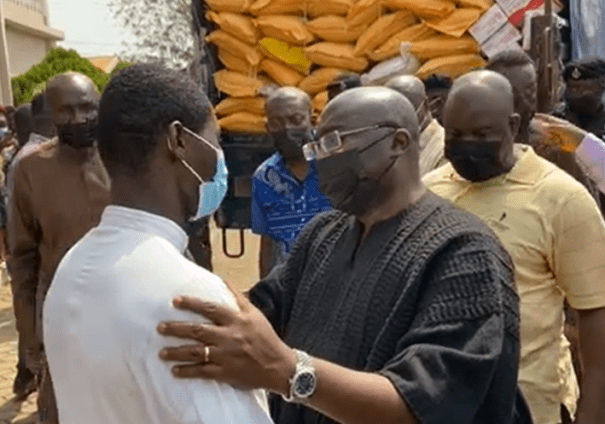 The government has presented a cash donation of GH₵200,000 to displaced victims and bereaved families of the Apeatse explosion.

The Vice-President, Dr. Mahamudu Bawumia made the cash donation on Friday when he visited the displaced residents who have been given temporary shelter at the St. Michael’s Catholic Parish, Bogoso.

At the end of the visit, Dr. Bawumia announced that government will foot the medical bills of all injured persons who are being treated at the various hospitals in the country.

VP @MBawumia has at the end of his visit announced Govt will take up the medical bills of all injured persons and work with the mining companies to rebuild the affected settlements in Appiatse. He has also donated cash of 200k and tonnes of relief items to assist the displaced.

On Friday morning, the Vice-President led a government delegation comprising Information Minister, Kojo Oppong Nkrumah, Inspector-General of Police, George Akuffo Dampare among others to ascertain the state of affairs in the community.

Dr. Mahamudu Bawumia assured that measures are being put in place to construct temporary housing facilities for all displaced residents of Bogoso-Apeatse.

He said government has engaged the State Housing Corporation and mining companies in the area to provide an instant haven for the stranded community members in the coming days.

“For the houses that have been destroyed, we are already beginning to think about how to rehabilitate and rebuild a facility here.

With the State Housing Corporation in consultation with mining companies around here, we will quickly try to put in place facilities that have been displaced. That will be a priority.”

Also, the Vice-President noted that those who got injured during the explosion, will be given the best of healthcare.

“Government on its part, is going to do everything to support the families and those who have been injured. We are also looking into how to make sure that all who are injured, are taken care of. Some have been taken to Tarkwa, Kumasi, some will be sent to Accra to get the best care that we can afford them.”

He continued: “A major disaster befell us yesterday. It did not only befall the community here in Apeatse, but the whole of Ghana. That is why the President asked me to lead this government delegation to come and assess the situation and see what we are going to do for the people.

We wish to express our deepest condolences to those who sadly lost their lives from this sad incident.”

On Thursday, January 20, there was an explosion at Apeatse between Bogoso and Bawdie in the Western Region.

Preliminary investigations conducted by the Police revealed that a vehicle carrying mining explosives, traveling from Tarkwa to Chirano mines, collided with a motorcycle, resulting in the explosion.

The driver sustained a deep cut on the head and was rushed to the Government Hospital, Tarkwa, but the Police escort escaped unhurt, the report added.

Reports reaching JoyNews reveal that 13 people have been confirmed dead and 59 others have sustained various degrees of injury.