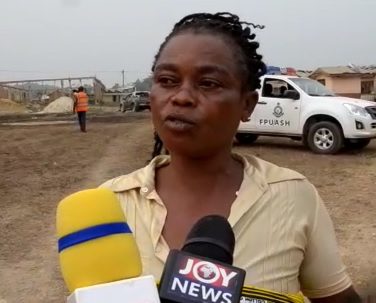 Many Ghanaians on Thursday were left in a state of shock after an explosion at Apeatse in the Western Region.

The blast near Bogoso claimed 13 lives leaving 59 others severely injured. The casualties included a 15-month-old.

Police say the incident was due to a collision between a vehicle carrying mining explosives, a motorcycle and another vehicle. Many residents have been displaced after their homes were razed to the ground by the blast.

Recounting the horrific incident, a resident, Ama Adomaa, said she lost one of her six children.

According to Adomaa, her 21-year-old son, Justice, upon hearing the blast went to the scene and returned to warn her.

After escaping to a nearby bush with her mother, she said her son went to the scene once again to film the incident.

However, Justice did not make it back as he was killed when the explosives in the truck detonated.

“As at 11 a.m., I was asleep when my son, Justice, rushed in saying ‘Mum, wake up, something serious has happened.’ I got up immediately. I saw smoke and thought our house would be destroyed by the fire. I took my mother and left for the bush.

Not knowing my son had returned to the scene to film the explosion. My 21-year-old son is dead,” she told JoyNews correspondent, Ina Thalia Quansah.

Ama Adoma is among those who have been displaced. She said the family sought shelter in a bush nearby.

“Both our old and new residences that were uncompleted were destroyed by the fire. So we slept in the bush throughout the night till morning.”

She’s one of the many affected families counting on the government’s support to survive.

“The authorities should please help us. We are suffering. This incident is unprecedented,” she said.

Meanwhile, Vice President Dr. Mahamudu Bawumia has assured that measures are being put in place to construct temporary housing facilities for all displaced residents of Bogoso-Appiatse.

He said government has engaged the State Housing Corporation and mining companies in the area to provide an instant haven for the stranded community members in the coming days.

Also, the Vice President noted that those injured in the explosion will be given the best of healthcare during their treatment.

He delivered the good news when he led a government delegation to ascertain the state of affairs in the community on Friday.