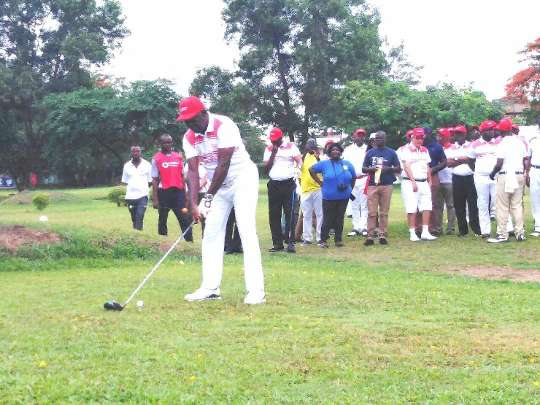 Asantehene, Otumfuo Osei Tutu II has a matter of urgency called for attention for least financed sporting disciplines such as golf in the country.

In his closing address at the just-ended Vodafone 62nd Asantehene Open Golf Championship in at the Royal Golf Club in Kumasi, he said “We should break away from the football bubble, it is time, sporting disciplines such as tennis and golf were given utmost priority in the nation’s sports development agenda.

“It is time for us to realize what we are missing out on golf and its ability to attract investors. There is no sport like golf in shaping our integrity and sense of fair play.”

Otumfuo Osei Tutu II mentioned that the sporting fraternity must take a second look at the inherent potentials in golf saying, “It should be mainstreamed into the nation’s sporting activities as this was critical in nursing and nurturing the youth to unearth the hidden ‘Tiger Woods’ in our society.”

The competition drew more than 300 amateur and professional golfers from across the West African sub-region, with Sampson Asorgbah, Achimota Golf Club (299 medal points) emerging tops in the Men’s Championship event. Constance Awuni from the Royal Golf Club made it a 4th straight win to emphasise her positions as the current number 1 amateur lady golfer in Ghana. Sunday Olapade from Nigeria made history when he became the first foreign player to win the Professional event with a total score of -3 (285) beating the defending champion Vincent Torgah and Emos Koblah to joint second place.

The Asantehene lauded management of the Royal Golf Club and key stakeholders for putting together the programme and also praised the participating golfers for upholding good sportsmanship. He charged them to work on extending the sport to the younger generation through the establishment of golf academies.

Youth and Sports Minister,  Isaac Kwame Asiamah said the government was determined to using sports as an avenue for job creation. He said the focus is shifting to sports infrastructure development throughout the country.

Vodafone Ghana Chief Executive Ms Patricia Obo-Nai pointed out that the company was proud to be associated with the tournament and thanked Asantehene for making it part of the 20th-anniversary celebration of the Asantehene’s coronation. She said that Vodafone was committed to Asanteman and are involved in a number of initiatives throughout May which has been set aside as Ashanti Month.