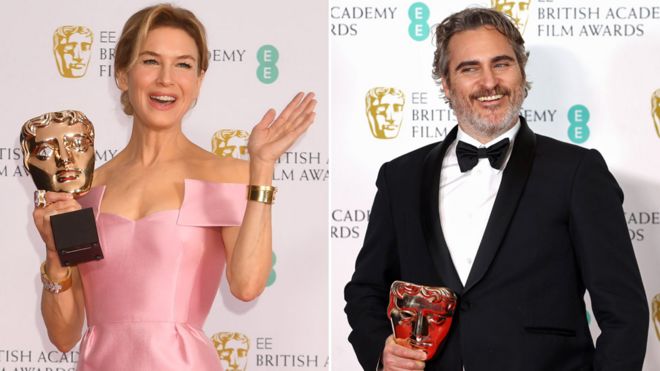 The Bafta Film Awards will have more nominees next year in an attempt to increase the diversity of the stars and film-makers who are up for honours.

All four acting categories as well as the best director award will have six nominees, instead of the usual five.

Ten titles will be in contention for the outstanding British film award – four more than the customary six.

Earlier this year, Bafta was heavily criticised after picking an all-white line-up of acting nominees.

Meanwhile, no female film-makers were nominated for the best director prize for the seventh year running.

Organisers carried out a “detailed review” as a result, and said they would now also seek to “meaningfully target” 1,000 new voting members from under-represented groups.

The move, they said, was one in a series of steps “to ensure a more representative and inclusive membership that reflects today’s British society”.

In January, Blue Story director Rapman was among Bafta’s many critics, saying it had done his gritty urban drama “dirty” by not shortlisting it for any awards.

Bafta said the review had begun as “a direct response” to the lack of diversity in its 2020 nominations, but had “soon expanded to encompass all aspects” of the organisation.

Bafta – the British Academy of Film and Television Arts – said the expansion of its outstanding British film award would enable it to “do more to champion the vast pool of multicultural British talent”.

“One of the key issues raised time and time again… was that too much deserving work was not being seen,” said film committee chair Marc Samuelson.

“The changes we are implementing are designed to ensure these films are seen and judged on merit alone.”

Changes to campaigning rules will seek to ensure “a fairer consideration of all films regardless of marketing budget”.

Bafta said this would ensure “smaller” films were not “left out of the conversation” and would have as much “visibility” as titles backed by major studios.

Changes to Bafta’s voting practices will ensure the best director jury will have a guaranteed number of female film-makers to choose from.

The final six nominees will be drawn from an expanded longlist of 20 names, half of which will be female.

Bafta said this would help to address “a historic lack of female representation in the directing category”.

Only five women have ever made the shortlist for the best director award, which Bafta first presented in 1969.

Kathryn Bigelow, the only woman to win, for The Hurt Locker in 2010, was also the last woman to be shortlisted when she was nominated in 2013 for Zero Dark Thirty.

All voting members will also now be required to take a “specially designed bespoke” course in “conscious voter training”.

Bafta said that would help its members “navigate and recognise the wider societal influences that can impact the voting process”.

In the case of the overall best film award, all voters will be required to watch all 15 movies on the longlist. The shortlist will continue to consist of five films.

Mr Majumdar praised them for “bravely sharing their experiences of racism and discrimination” during “tough, chastening [and] captivating” sessions.

“This is a watershed moment for Bafta,” the TV producer said in a statement. “The Academy has never opened itself up like this before.”

Bafta said “significant changes” to its Television Awards would be announced in October and that its Games and Children’s Awards would also be reviewed.

The 2021 Bafta Film Awards are scheduled to take place on 11 April, two months later than usual due to the coronavirus pandemic.

DISCLAIMER: The Views, Comments, Opinions, Contributions and Statements made by Readers and Contributors on this platform do not necessarily represent the views or policy of Multimedia Group Limited.
Tags:
Bafta Film Awards
coronavirus pandemic