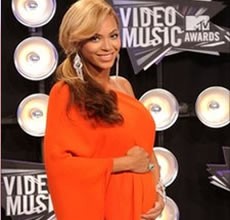 Singer Beyonce Knowles has outlined a baby bump to photographers after months of speculation she might be pregnant.

The R&B star, 29, used her hands to frame her baby bump under a loose-fitting dress as she arrived at the MTV Music Video Awards in Los Angeles.

Beyonce did not talk to media but her publicist later confirmed the pregnancy, Associated Press reported.

It will be the first child for Beyonce and her husband rapper Jay-Z, who married in 2008.

Beyonce is competing for the MTV Best Female Video Award for Run the World (Girls). She is also performing at the awards.

Her other hits include Beautiful Liar and Single Ladies. She has sold more than 75 million albums worldwide.