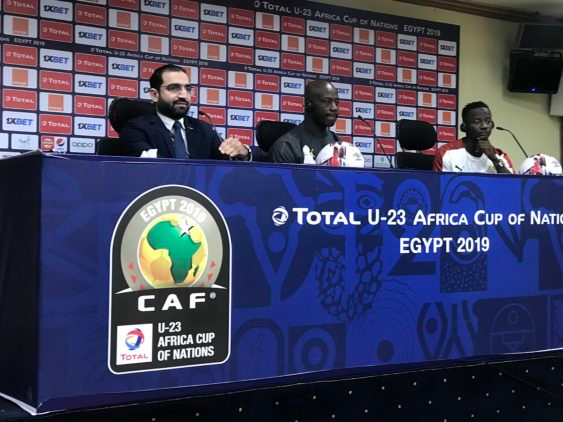 Ghana U23 head coach Ibrahim Tanko says tough the Black Meteors deserve a ticket to the 2020 Olympic Games, his side must fight for the slot in Friday’s third-place play-off match against South Africa.

Ghana missed out of earning an automatic ticket to the 2020 Tokyo Olympic Games after losing 4-2 on penalties (2-2 full time) to Ivory Coast in the semi-finals match played on Tuesday.

Coach Tanko’s side have a final chance to grab a ticket on Friday when they come up against South Africa at the Cairo International Stadium at 4 pm (2 pm GMT) on Friday.

Ghana’s coach, however, believes that his side’s performance in the competition must be rewarded with a ticket to the Olympics though he admits that the match against the South Africans won’t be easy.

“Based on our performance in this competition, I believe we deserve to go to Tokyo ( Olympic Games) but we have to really fight for it tomorrow and am sure that the boys will be up to the task”.

“It’s our last game in the tournament and it’s also a game that can qualify us to the Olympics so we will put in our best efforts to secure the ticket.

“We know it won’t be easy because both teams have been good in the tournament”, the Ghana U23 coach said at the pre-match press conference on Thursday.

Ghana had to come back twice in the game against the Ivorians after conceding twice through some defensive lapses and though Coach Tanko admits the team’s frailties, he is confident the Black Meteors will avoid mistakes in the playoff match.

“It’s a fact that we’ve conceded goals in this competition due to defensive errors but we always try to minimize these errors. “

“We can better our chances if we make fewer errors. It’s difficult because we didn’t some of the players who played in the qualifiers here with us.

“We have a chance tomorrow and we will engage in some sessions to help us minimize mistakes in Friday’s match”.

We need to avoid mistakes and if we do that we will have an upper hand in the game”, coach Tanko emphasized.

He added that though his players were quite exhausted after playing for 120 minutes on Tuesday, they are professionals and will be battle ready against South Africa.

“Since Tuesday’s game we’ve worked hard on preparing and psyching them to play 100 % and secure the ticket to the Olympic Games on Friday”, Coach Tanko stated.

On the refereeing errors in the competition, the Ghana U23 boss called on CAF to consider introducing the VAR to assist referees in making decisions during such competitions.

“Introducing the VAR will be a decision for CAF but it’s always painful to lose a game due to a referees mistake and Caf should look at it. They should also consider the organisation of this competition so that the teams will have their best players available during an official FIFA period”, he intimated.

Hosts Egypt and Ivory Coast who have already qualified to the Olympic Games will face each other in the final match at 8 pm on Friday after the third-place match.

DISCLAIMER: The Views, Comments, Opinions, Contributions and Statements made by Readers and Contributors on this platform do not necessarily represent the views or policy of Multimedia Group Limited.
Tags:
Black Meteors
Ibrahim Tanko
Olympic games