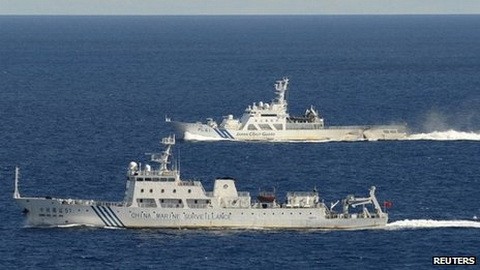 Six Chinese surveillance ships have entered waters near islands claimed by both China and Japan.

China said the ships were carrying out “law enforcement” to demonstrate its jurisdiction over the islands, known as Diaoyu in China and Senkaku in Japan.

At least two of the vessels left after the Japanese coast guard issued a warning, Japanese officials say.

The move came after Japan sealed a deal to buy three of the islands from their private Japanese owner.

Japan controls the uninhabited but resource-rich East China Sea islands, which are also claimed by Taiwan.

The first two ships then left the area. A third ship left later on Friday morning, one report said. No force was used, Japanese officials added.

“Our patrol vessels are currently telling them to leave our country’s territorial waters,” the coastguard said in a statement.

The Chinese foreign ministry confirmed that its ships were there.

“These law enforcement and patrol activities are aimed to demonstrate China’s jurisdiction over the Diaoyu Islands and its affiliated islets and ensure the country’s maritime interests,” a statement said.

The US has called for ”cooler heads to prevail” as tension intensifies between China and Japan over the islands, which lie south of Okinawa and north of Taiwan.

US Defense Secretary Leon Panetta is due to visit both Japan and China from this weekend as part of a tour of the region that also includes New Zealand.