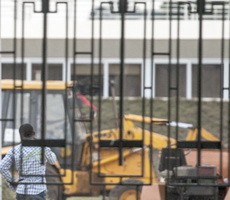 Construction of a number of graves has begun at the Flagstaff House, the presidential palace located along the Independence Avenue in Accra, for the burial of President John Evans Atta Mills who passed away a little over a week ago.

Wednesday, a number of Ghanaian workers and their Chinese supervisors were seen busily working on the graves at the forecourt of the facility, with a bulldozer excavator and a tipper truck on site.

The graves are nine in number, raising questions about the other bodies to be interred in them apart from that of President Atta Mills.

The graves are about 50 metres away from the main gate of the presidential palace.

There was heavy police presence at the place, making it absolutely impossible for our roving reporters to have access to the place, considering the fact that it is already a high security zone.

But Daily Guide sources have hinted that as many as nine graves are being constructed at the Flagstaff House in defiance of suggestions by a number of Ghanaians including the Metropolitan Catholic Archbishop of Accra, Most Reverend Charles Gabriel Palmer-Buckle.

Others have also condemned the decision of virtually turning the presidential palace, which President Mills declined to use when alive, into a cemetery.

The family of the departed president stated that it wanted the former president to be buried in his hometown, Ekumfi Otuam.

However, a statement issued in Accra yesterday evening by the Funeral Planning Committee (FPC), chaired by Kofi Totobi Kwakye, a former National Security Minister, and signed by Deputy Information Minister James Agyenim-Boateng, spokesperson of the committee, said, “After a series of consultations, the proposed burial sites have been narrowed down to the Kwame Nkrumah Memorial Park and a location within the old Flagstaff House.”

However, attempts to speak to Mr. Agyenim-Boateng to ascertain why a number of graves were being dug at the Flagstaff House, when the committee was yet to take a final decision on the burial place, proved unsuccessful since he did not answer several calls to his mobile phone.

What is also not clear is whether some other bodies would be buried alongside that of the late President Mills in view of the number of graves being dug.

Confusion
A member of the committee and former Chief of Staff under the Rawlings regime, Nana Ato Dadzie, who spoke on the issue earlier in the day, said the place was an ideal location for the burial of the late president.

That, he said, was because there was enough space at the presidential palace to serve as a burial ground for the late president, insisting that it would not affect the sensitivity of any president who intended to operate from the premises.

Nana Ato Dadzie, who spoke on Metro TV’s Good Morning Ghana, said, “A portion of that land has President Nkrumah’s residence, there is a portion which used to have a whole zoo and President [John] Kufuor rightly thought that we needed an edifice so he put up a house, popularly known as Jubilee House, and it’s only one facility on a portion of that land so there is a lot of space out there where it could be developed.”

The committee was reported to have visited and held discussions with the leadership of Parliament, the National Chief Imam, the Chief Justice and the Council of State as part of ongoing consultations to build a national consensus on the funeral and burial arrangements for the late president.

“The FPC briefed them on the proposed funeral arrangements and used the discussions to seek their opinions on an appropriate resting place for President Atta Mills,” the statement said.

But Most Rev. Charles Palmer-Buckle appealed to the Mills funeral committee to consider the Kwame Nkrumah Mausoleum for the burial of the late President John Mills.

That, according to him, was because the mausoleum held such an important historical significance that it could only be the best burial grounds for the late president.

“We were there and there is enough space and the place is historical for the dear country Ghana because that is where Kwame Nkrumah declared independence for the country and so if it becomes a place where all our future heads of state would be buried that would be great,” he told Joy FM yesterday.

He even suggested exhuming the bodies of all former heads of state to be buried there.

Former Chief of Staff under the erstwhile Kufuor administration that constructed the facility, Kwadwo Okyere Mpiani, has equally spoken against any attempt to convert the presidential palace into burial grounds for former heads of state.

He said the committee ought to build a consensus among Ghanaians before finally settling on the venue since another president could decide not to allow the place to be turned into a cemetery.