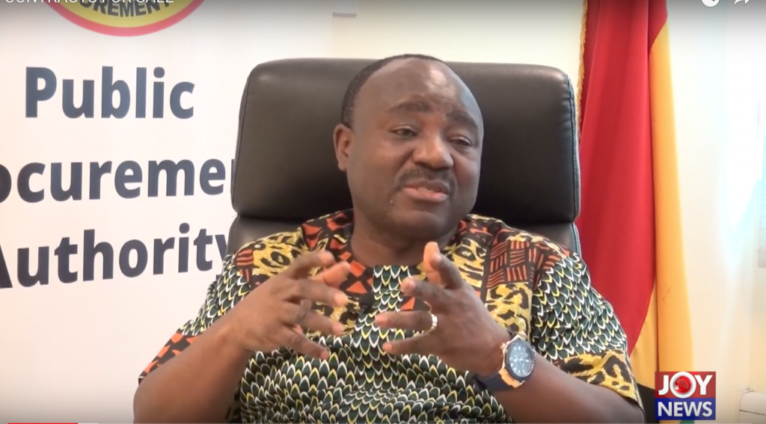 The Special Prosecutor says the Commission for Human Rights and Administrative Justice (CGRAJ) understated the amounts in the three accounts of sacked Public Procurement Authority boss.

Martin Amidu while commending the Commission’s work said for some “reason it understated the amounts disclosed by the bank statements from the three banks accounts of Adjenim Boateng Adjei, exhaustively reviewed by the Auditor General.”

In a press statement Monday, he said the monies in Mr Boateng Adjei’s account is more than the ¢14 million stated but rather ¢41 million [if one uses a conversion rate of $ is to ¢5.7].

Mr Boateng Adjei was suspended from office by President Akufo-Addo following an investigative documentary by Manasseh Azure Awuni, which revealed a company he co-owned, has been selling government contracts it won through single-source and restrictive tendering, to the highest bidder.

In suspending him, President Nana Akufo-Addo also directed the Commission on Human Rights and Administrative Justice (CHRAJ) and the Office of the Special Prosecutor to investigate his appointee for conflict of interest and corruption.

Two weeks ago, CHRAJ came out with its report recommending that the President sacks then suspended PPA boss and bar him from holding any public office for the next five years.

According to Mr Amidu, “I froze the bank accounts of all the suspects together with their legal entities. This Office secured the bank statements of Mr Boateng Adjei, his brother-in-law Francis Arhin, and other suspects. The bank statements were made available to the Acting Head of Investigations for further action.

“I then sent a soft copy of the bank statements by way of referral to the Auditor- General who was collaborating with this Office in the investigation of the procurement malpractices for analysis to assist the investigation. The Auditor-General in a letter with reference number AG/01/19/123 of 4th November 2019 under the subject title of: “Review of Bank Statements Mr Adjenim Boateng Adjei for the Period 01/01/2017 -31/08/2019” forwarded to this Office his review of the bank statements.

“If you did your calculations and analysis you will come out with the following closing balance of deposits for Mr Boateng Adjei from 2017 to August 19, 2019,” Amidu said.