Climate change adaptation is key on our agenda – NaDMO 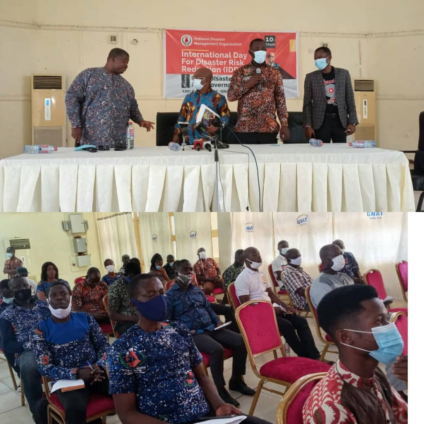 He said as the world battles with the issue of climate change, NaDMO was undertaking many activities, including tree planting aimed at increasing climate resilience and decreasing vulnerability to natural and built environments.

Mr Bosson, who was addressing a press conference in Ho to commemorate this year’s International Day for Disaster Risk Reduction, said his outfit had planted over 1,000 trees across the Region as a preventive protocol against disaster.

He said the Organisation also sensitised some major institutions including banks, telecos, markets, driver unions and private organisations on the concept of disaster risk reduction (DRR) and its approaches, and urged them to play their part for the region to be disaster-free.

The Director emphasised the need for stakeholders, including the media, public servants, civil society organisations, traditional and religious authorities to collaborate effectively in managing and reducing disaster and climate-related risks.

Mr Bosson said with the appropriate use of meteorological, hydrological and climate information as part of a comprehensive multi-sector, multi-hazard, multi-level approach, more could be achieved in mitigating and managing disaster risks in communities.

He underscored the importance of the celebration of the Day, as it would serve as an opportunity to appreciate the gains being made across the globe in reducing disaster risk and its impacts on lives, livelihoods and health as stipulated in the Sendai Framework for DRR, from 2015 to 2030.

Mr Bosson said disaster risk reduction required much investment to save lives “not just after the disaster occurs, but even as it strikes,” and therefore called for more support from government and benevolent organisations.

He said it was imperative to have “first responders” who would be well trained to help assess and identify disaster survivors who were trapped or injured and structures and installations that malfunction after a disaster struck for a quick and timely response.

Volta Regional Minister, Dr Archibald Yao Letsa called on the public to guard the country’s vegetation cover and avoid indiscriminate felling of trees and plant more trees to serve as windbreaks to protect the country against heavy storms.

He implored the public to avoid throwing rubbish into gutters and to desilt choked drains to avoid flooding, whenever there was a downpour.