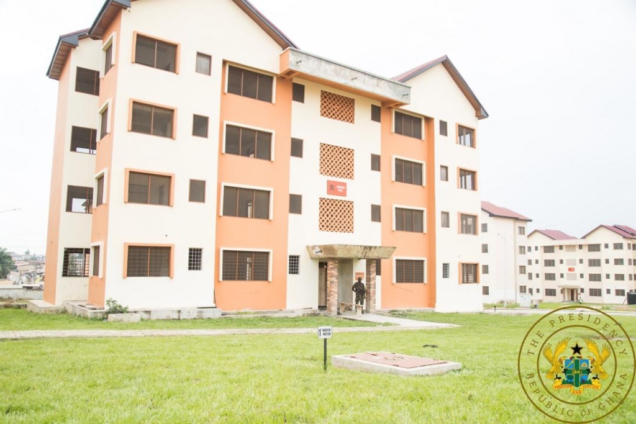 There have been increased calls for government to convert the Affordable Housing Project at Asokore Mampong in the Ashanti Region into hostel facilities.

The latest is the Ashanti Region Secretary of the Ghana Real Estates Development Agency (GREDA), Frank Aboagye Danyansah, who suggests the facility be given to the Kwame Nkrumah University of Science and Technology (KNUST).

The cost of hostel accommodation for students around the school has been described as ‘unreasonable’ and outrageous due to high demand.

Speaking on Luv FM’s Page 995 show, Mr Danyansah, who doubles as a Public Interest Advocate, believes this intervention could help solve the accommodation crisis experienced at the Kumasi-based tertiary institution.

His suggestion comes on the heels of a recent protest by some students of KNUST over what they described as exorbitant hostel fees charged them by some private hostel facilities.

“We have the Asokore Mampong Affordable Housing now going to waste. SSNIT took 500, and out of the 500, they have completed 150 which they have given out; the remaining 350 is still there.”

The total number of housing units is 1053. Out of which 26 are shops, and 1027 are residential accommodation units. According to him, because 850 have not been used.

“Let us modify these ones into hostels, and if we’re doing 4 in a room, these 850 units can provide 4,000 students with accommodation.”

Mr Danyansah continued that, “Since Asantehene Otumfuo Osei Tutu II is the Chancellor of KNUST, and this affordable housing has been named after him, my suggestion is that we should convert the affordable housing at Asokore Mampong should be converted into student hostels for KNUST…If we can, why are our leaders sitting there and students are arguing with private developers?”

The school’s management has since responded to the students’ concerns, assuring them of a possible reduction in consultation with the private developers.

The Ashanti Regional GREDA scribe further mentioned that until KNUST management itself invest in accommodation for students or, better still, provide certain reliefs for private developers within its “Build-Operate-Transfer” arrangement, the situation of high hostel charges would not change.

“I am a private developer, I have my hostels there, I want returns on my investments, and so you don’t tell me to have a cap on the ceiling of how much I price; no. So what you have to do, is to expand the number of facilities within your campus and make it cheaper,” he added.