In an attempt to reduce cows’ anxiety and hopefully increase their dairy production, a cattle farm in Moscow’s Ramensky district has equipped its herd with specially-designed virtual reality headsets.

Research has shown that there is a link between a cow’s emotional state and it’s daily milk yield. In the past, we’ve heard of dairy farms playing soothing classical music for their cows in order to lower their stress level and increase productivity, but as technology advances, new mood-altering solutions are introduced.

For example, the RusMoloko farm in Moscow recently equipped its cattle with VR systems adapted for the “structural features of cow heads”. 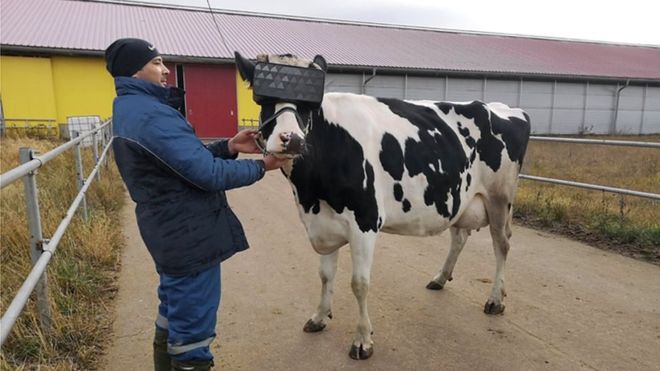 News of the unusual experiment at RusMoloko recently made national headlines in Russia, after a photo of a cow wearing a large virtual reality headset went viral on social media.

At first, people thought it was a joke, but Moscow’s Ministry of Agriculture and Food confirmed that it had been conducting an experiment into how virtual reality affected cows’ mood and dairy yield.

The developers of the unique VR headsets worked closely with farmers and veterinarians and relied on cattle-vision research to ensure that the devices were suited for use by cows.

It’s not clear how long the animals have been wearing the headsets, but according to the Moscow Times, initial tests resulted in “reduced anxiety and improved overall emotional mood in the herd”.

The second stage of the experiment will focus on how virtual reality affects cows’ milk productivity.

In case you’re wondering what the cows are looking at through those headsets, the ministry’s statement mentions a summer field simulation which farmers presumably use to lower the animals’ stress on overcast or rainy days.

Researchers plan to expand the “VR for cows” experiment if they continue to see positive results from this pilot study.