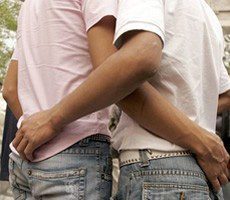 The Constitution Review Commission (CRC) has failed to deal with the complicated issue of recognizing the rights of homosexuals in Ghana’s Constitution.

Over 98 percent of submissions received by the Commission during its consultations were to the effect that homosexuality should not be recognized.

But the CRC’s recommendation did not favour the majority view of the non-recognition of the right to sexual orientation for gays and lesbians.

According to the CRC’s report, “It is very probable that a proposal to give some recognition to same-sex relationships in Ghana at this stage will be condemned by a large section of the population in the country – mainly on religious and cultural grounds.

“On the other hand, a suggestion to introduce a provision in the Constitution expressly excluding same-sex marriages in Ghana would be clearly seen by many people in the country and outside of it as a reactionary move not worthy of a progressive state”, the CRC report stated.

The Government’s White Paper has taken note of the CRC’s recommendation that the legality or otherwise of homosexuality be decided by the Supreme Court if the matter comes before the Court.

But the decision was strongly contested by some participants at a CRC forum in Kumasi, particularly the Queen mother of Akim Kotoku Traditional Area, Nana Akua Asantewaah III, who passionately questioned the inability of the CRC to act in accordance with the majority view during its consultations.

Prof. Albert Fiadjoe, who chaired the CRC said the Commission could not have recommended otherwise.

“The evidence before us, whether scientifically or otherwise, was inconclusive one way or the other. Under the Constitution, one of the institutions that can recognize an evolving right is the Supreme Court. So we say to the extent that the evidence is inconclusive let those who feel strongly one way of the other go and test it… so you can take signatures and go and present that to the Supreme Court to say ‘don’t go that way’”, he noted.

Prof. Fiadjoe further challenged Parliament to formulate a law that would criminalise homosexuality using the overwhelming majority stance of Ghanaians on the matter and check whether the law would make any difference.

The Constitution Review Commission was mandated in January 2010 to collate the views of Ghanaians and undertake a consultative review of the 1992 Constitution.

In December 2011, the Commission’s report was submitted to government and subsequently in June 2012, a Government White Paper accepted almost 90 percent of the CRC’s recommendations.