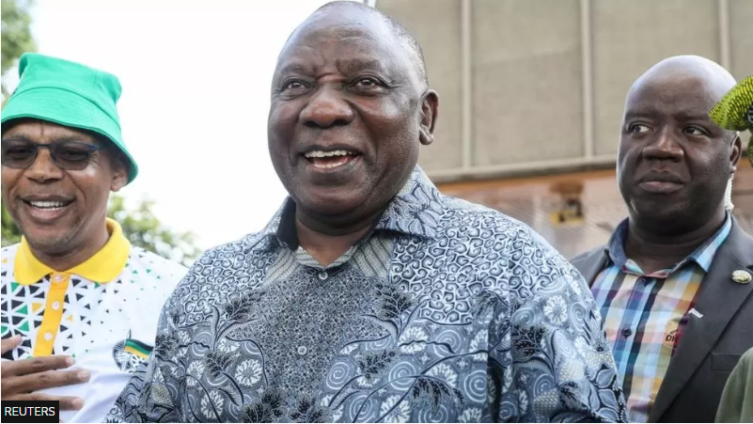 South African President Cyril Ramaphosa has said his fate is in his party’s hands, in his first comments since an official report on a scandal over money stolen from his farm.

Opponents have called for his resignation after a panel of legal experts concluded he may have broken the law.

On Saturday, Mr Ramaphosa’s spokesman suggested he would fight on.

The president has now said the party top brass should decide his next move.

The leaders of the governing Africa National Congress (ANC) are currently meeting in Johannesburg to discuss the findings of the report.

Speaking outside the venue for the meeting, the president said that his fellow members of the National Working Committee had given him permission not to attend “so that they’re free to express themselves as openly and as thoroughly as possible without any form of fear or favour”.

On Monday, the ANC’s larger decision-making body, the National Executive Committee (NEC), will also be meeting.

“It is up to the National Executive Committee, which I am accountable to, to take whatever decision,” Mr Ramaphosa told journalists.

The scandal erupted in June, when a former South African spy boss, Arthur Fraser, filed a complaint with police accusing the president of hiding a theft of $4m (£3.25m) in cash from his Phala Phala game farm in 2020.

The president said the $580,000 had come from the sale of buffalo, but the panel, headed by a former chief justice, said it had “substantial doubt” about whether a sale took place.

The panel’s findings have been handed to parliament, which is set to examine them and decide whether or not to launch impeachment proceedings against the president.

On Saturday, Mr Ramaphosa’s spokesman Vincent Magwenya said the president was “not resigning based on a flawed report, neither is he stepping aside”.

“It may be in the long-term interest and sustainability of our constitutional democracy, well beyond the Ramaphosa presidency, that such a clearly flawed report is challenged,” he added.

Mr Ramaphosa is also under pressure from the opposition, as well as rivals within the ANC, to resign.

The scandal is especially damaging for Mr Ramaphosa because he came to power vowing to clear up the corruption which had dogged the country under his predecessor, Jacob Zuma.

The ANC remains deeply divided between supporters of Mr Zuma and those who back Mr Ramaphosa.

Mr Ramaphosa will be challenged for the ANC’s leadership by his former health minister Zweli Mkhize, who has also been accused of corruption. He denies the allegations.

DISCLAIMER: The Views, Comments, Opinions, Contributions and Statements made by Readers and Contributors on this platform do not necessarily represent the views or policy of Multimedia Group Limited.
Tags:
Cyril Ramaphosa
South Africa