A 60-year-old pharmacy worker has become the first deaf person on record to row an ocean by finishing a 3,000-mile journey across the Atlantic.

Mo O’Brien and her fellow crew members, including her daughter, landed on the Caribbean island of Antigua 49 days after setting out from the Canary Island of La Gomera in December.

Their arrival late on Thursday local time makes them the fastest female trio to complete the challenge.

The Ocean Rowing Society, which is responsible for monitoring ocean rowing records, confirmed the world first.

Ms O’Brien, from Bojewyan Stennack in Cornwall, rowed almost 3,000 miles (4,800km) of Atlantic Ocean with her daughter Bird Watts, 32, from Mevagissey in Cornwall, and their friend Claire Allinson, 45, from Exmouth, Devon.

The trio rowed in pairs for four-hour shifts, then had two hours of rest, on a constant cycle for the entirety of the Talisker Whisky Atlantic Challenge.

In addition to the seasickness, blisters and extreme sleep deprivation, Ms O’Brien said it was “very much a learning curve” for the crew to manage her deafness. 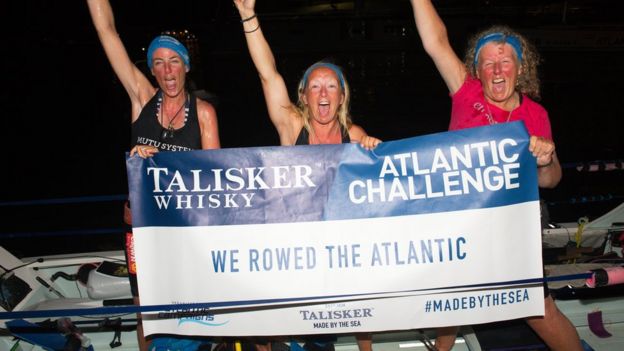 Speaking at the finish line in Antigua, she said: “I’m relieved to be here, but I kind of wish I was still out there too. I absolutely loved it.”

The pharmacy dispenser said she is already making plans to row the Pacific. “Why not? Give me a week to have a shower and some clean clothes,” she joked. 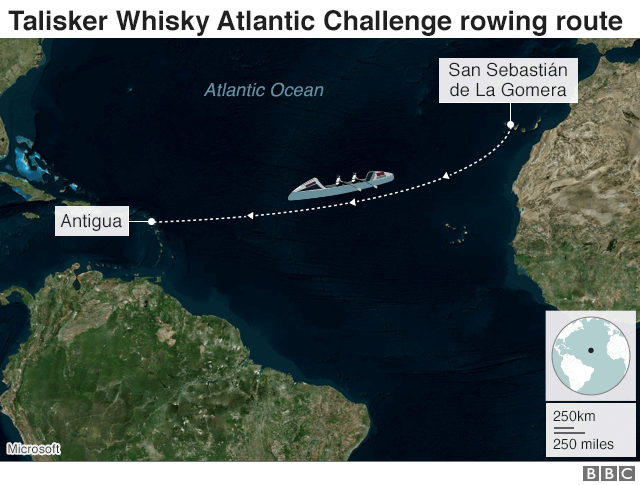 Ms Watts said it felt “awesome but very wobbly” to be back on dry land.

Before she set off, she said her mother’s profound deafness was “a bit of a nightmare” as rowers “rely a lot on your hearing”.

Ms O’Brien usually uses lip-reading to communicate, but rowers do not face each other in the boat, so she could not have a conversation while at the oars. This meant she and her daughter had to learn how to communicate without panicking.

“She’ll say, ‘stop rowing’, or ‘back paddle’, or ‘just row on your left’… I don’t hear until I’m too late, and then she’ll start to shout at me… it’s almost frightening,” Ms O’Brien said during training.

Ms Watts, a newly-qualified radiographer, said: “If we’re going over in a storm and our boat is going to capsize, you would [usually] shout through to people in the air-tight cabin to stay inside. But you can’t communicate anything like that with mum.

“We just do our best. We have certain hand signals that mean certain things. And for example, if she’s in the cabin in stormy weather, she doesn’t come out unless we tell her.”

Other adjustments the team had to make included Ms Watts and Ms Allison having to stop rowing to wake Ms O’Brien for the start of her shift, because she does not hear alarm clocks. “Once she’s asleep, she’s asleep,” Ms Watts said.

“Every challenge you might think of that you might encounter on a boat, we also have to think how to overcome for someone who can’t hear,” she added. 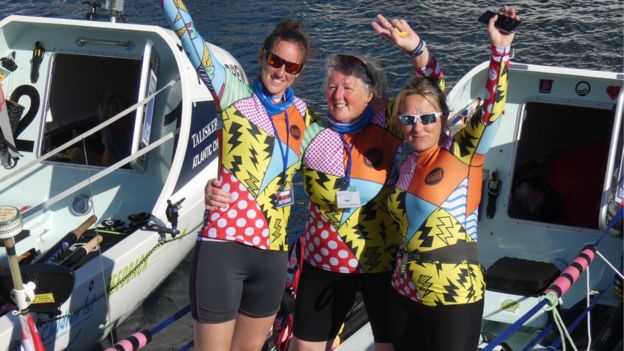 In a blog post, Ms O’Brien said the team needed “humour in abundance” to complete the challenge, adding: “I often mishear things and respond with ridiculous answers although I’m not sure which is funnier – my nonsense or the recipient’s face.”

Ms O’Brien said she had wanted to mark turning 60 by doing “something bigger, something more challenging” than other endurance events she has taken part in, such as a marathon and a charity cycle in Kenya.

The mother-of-two was inspired to do the challenge after reading a book about four Yorkshire women who became the oldest all-female crew to make the crossing. 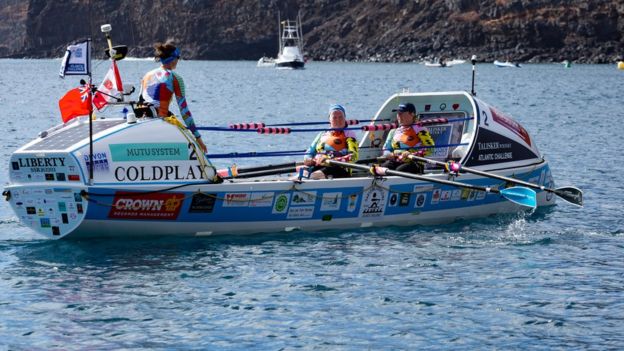 Ms O’Brien was born with nerve deafness but grew up undiagnosed.

“My parents thought I was painfully shy – they didn’t pick up that I wasn’t hearing,” she said.

She said her deafness “has affected me very much in lots of ways” and can be “very isolating”.

“Deaf people withdraw from life,” she added. “There are lots of things that I know that I stopped myself doing, because it was so difficult.”

Ms O’Brien struggled to cope with NHS hearing aids when she eventually got them at about the age of 30.

They boosted her hearing to 30% of what most people can hear, but with disorientating background noise.

But then one of the crew’s sponsors, ReSound, shared cutting-edge equipment with her, including a microphone which can be tuned into her hearing aid via Bluetooth.

Ms O’Brien uses an app on her phone so that what she wants to hear – whether it be a conversation, birdsong, or music – is clearly separated from background noise.

This meant she could hear instructors and pass mandatory courses to take part in the Atlantic row – and could hear her fellow rowers. 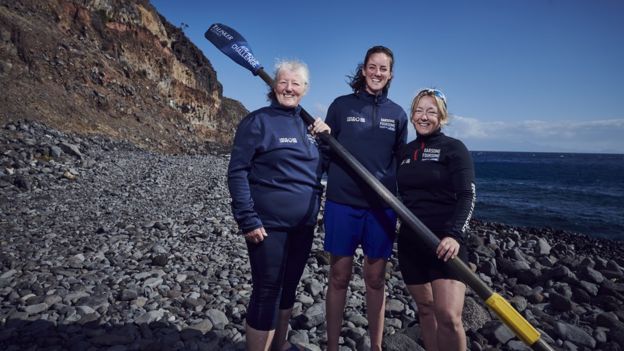 Ms O’Brien says she has become more sociable in the last 18 months, with the help of an innovative new hearing aid

Ms O’Brien, who has been an amateur rower for 20 years, said her “crack on, just do it” mentality has helped her to overcome difficulties.

“The fact that my mum died when she was 56, I feel very aware that time goes so quickly and we really need to do things while we can,” she said.

“There’s something in me that just says don’t do the ordinary, don’t go to work every day, pay your mortgage, go home, watch a bit of telly, or whatever your routine is.” 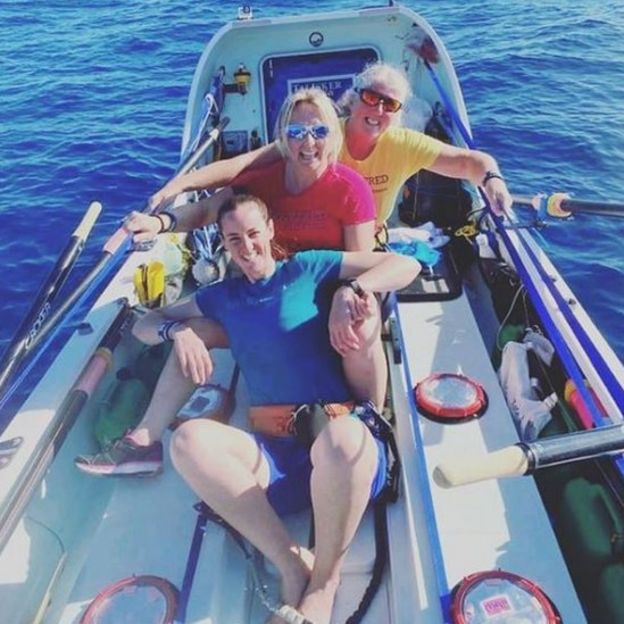 Guinness World Records does not award records in relation to disabilities, but its rowing records are sourced and verified by the Ocean Rowing Society – which says Ms O’Brien is the first deaf person to row an ocean.

The society said, as of 14 January, 1,083 people had rowed an ocean, including about 440 crews that have crossed the Atlantic from east to west.

The British Deaf Association congratulated Ms O’Brien on Friday, with a spokesperson saying: “Mo is an inspiration to many and is an example of what deaf people can achieve.”

Ms O’Brien “dreams” her achievement might encourage the Deaf Association to enter an all-deaf crew into the challenge.

“I just feel it’s showing people that they can do things… whatever disability you’ve got.”