Director, lead actor arrive in Ghana ahead of ‘Borga’ premiere 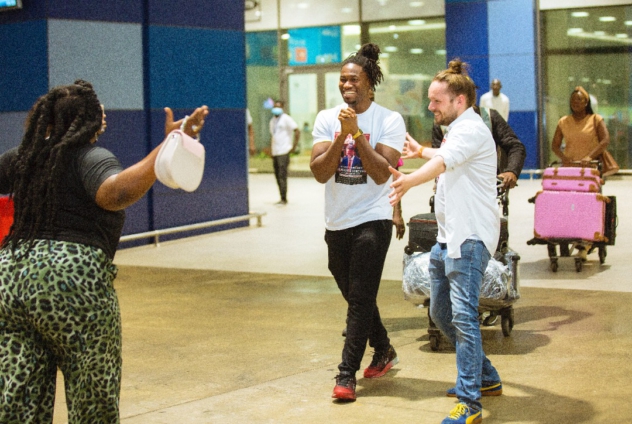 They were received at the Kotoka International Airport by some Ghanaian cast and crew who also worked on the production.

Both Yorke and Eugene during the virtual press conference held earlier this month had expressed excitement about their plans to return to Ghana to show the film to the public for the first time.

The two worked together with some Ghanaian cast and crew to shoot the film in 2018.

They (York-Fabian Raabe and Eugene Boateng) are scheduled to join other casts to embark on some press tours within the week leading up to the premiere on Friday.

The German-Ghanaian migrant drama ‘BORGA’ last year at the Ghana Movie Awards picked 8 awards out of its record 18 nominations. It has also screened in several international film festivals across the globe.

The film seeks to clear the assertion that all migrants are living a successful and wealthy lifestyle abroad. The details the life of a Ghanaian migrant who wants to make it big in Germany.

But the reality is not what he wants to accept or show to his family back home.

Like the story it tells, it is only right that the film returns home after taking on the world.

BORGA will be showing on Friday 24th of June at the Silverbird Cinemas at 7:30 pm and 8:30 pm. Tickets are selling for GHs50.

DISCLAIMER: The Views, Comments, Opinions, Contributions and Statements made by Readers and Contributors on this platform do not necessarily represent the views or policy of Multimedia Group Limited.
Tags:
Borga
Cast
Premiere
York-Fabian Raabe