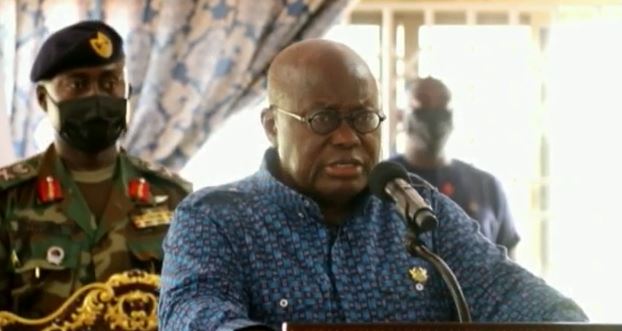 President Akufo-Addo has appealed to the chiefs and people of the Upper West Region to work in tandem with security agencies in the region to halt the smuggling of subsidised fertiliser to neighbouring countries.

He said the fertilizer is borne out of the taxpayers’ money and should not be allowed to be carted out of the country by greedy criminals.

Last month, about 13,500 bags of subsidized fertiliser valued at ¢1,602,000 were carted out of the country through the Sissala West district to Burkina Faso.

President Akufo-Addo made the appeal at Nandom on his final day whistle-stop visit to some constituencies in the Upper West Region.

“I want you to enhance your cooperation with the security agencies so that we can stop the snuggling of fertilizers from Ghana to our neighbouring countries. We should not allow a few greedy criminals to take the fertilizer subsidized by all of us across Burkina Faso to sell at Burkina Faso. They are bringing disadvantage to all of us,” the President added.

The Planting for Food and jobs fertilizer subsidy programme was introduced in 2017 to not only increase production in the agriculture sector but to reduce the cost of farming and the burden on the farmer as well.

Several thousands of farmers are benefitting from the programme.

President Akufo-Addo thanked the people of the Nandom constituency for voting to retain him in power alongside Interior Minister, Ambrose Dery.

He said though the party lost 3 of the five seats previously held and gained one, the Nandom constituent stood like the ‘Rock of Gibraltar” to propel him to win.

He said the partnership between himself and the Interior Minister, Ambrose Dery has reduced significantly the number of cases of armed robbery in the region which hitherto was on the ascendency.