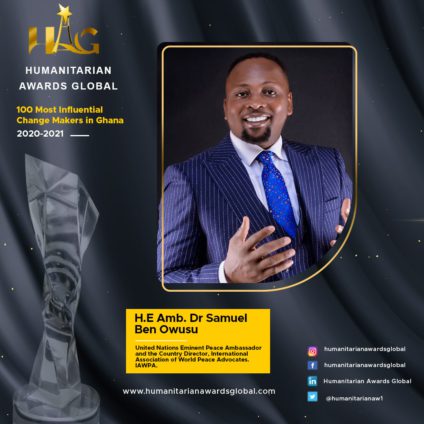 He is the General Overseer of The Pottersville Church International, East Legon Hills accra with over 23 branches.

He is a partner in Smile Davila Ltd. And the founder of Charisma Multimedia and TV Ltd, including SamJoy Foundation.

Humanitarian Awards Global is to recognise and award extraordinary individulad and groups who are postitively impacting the lives of people, nature and society in Ghana.

The Awards to identify, honour and celebrate a cross section of the nations most influential and accomplished businesses doing humanitarian works and leaders from a wide range of industries who are committed to improving lives and preserving the environment through their work and businesses

Dr Samuel Owusu believes in peace as the platform for national and interpersonal development and through this he has launched several peace campaigns including; Peace Power Campaign, Every life Counts Campaign, Coalition Against Hate Speech campaign, Peace and Tolerance Campaign and  Youth for Peace Campaign to create awareness of the importance of peace at all levels.

He was actively involved in Campaigning for Peace and the need for Peace before, during and after  the  Election 2020 in almost all the 16 regions in Ghana.

He was accredited by the Electoral Commission as an International UN Election Observer which allowed him to visit various polling stations engaging in dispute resolutions, conflict management and ensuring Peace and Tolerance among many places during the Election. He was engaged by several media stations on his views on Electoral Process  in Ghana.

He was invited to the UN General Assembly Meeting with the President of the 76th United Nations General assembly town hall meeting and was given the opportunity to speak as a special consultative Speaker on Youth Unemployment in Africa .

Dr Owusu is a visionary Leader who never ceases to connect humanity to its divinity. During the height of the pandemic, his team and himself were responsible for feeding hundreds including women and children especially our first responders.

He provided 1000 face masks, hand sanitizers and food to the underprivileged. In addition he, provided daily essentials to widows and children in villages and towns in his surroundings during the lockdown 2020.

He is a true philanthropist in his own right, he has opened his home and church to people without homes, through which he provides a safe haven for those who need shelter.

A man of selfless ambition who desires nothing more but to see the world especially his country Ghana operate in peace.

Through the SamJoy Foundation his team and himself have donated several items like food, clothes and money for businesses  to  over 600 widows, disabled persons, poor and needy in our society in the Eastern Region, Upper west region and in the Ashanti region.

Samjoy Foundation has also sponsored and granted scholarship to many poor but brilliant students.
A true visionary of our time who is trailblazing on mantra and legacies of peace for all of humanity.

The multiple award-winning preacher, Philantropist and was shortlisted by the Humanitarian Awards Global amidst Dr. Mensah Otabil, Dr. Michael Boadi Nyamekye, Dr. Lawrence Tetteh, Ibrahim Mahama, and many others.

DISCLAIMER: The Views, Comments, Opinions, Contributions and Statements made by Readers and Contributors on this platform do not necessarily represent the views or policy of Multimedia Group Limited.
Tags:
Dr Samuel Ben Owusu
Humanitarian Awards Global
Most Influential Change Maker in Ghana