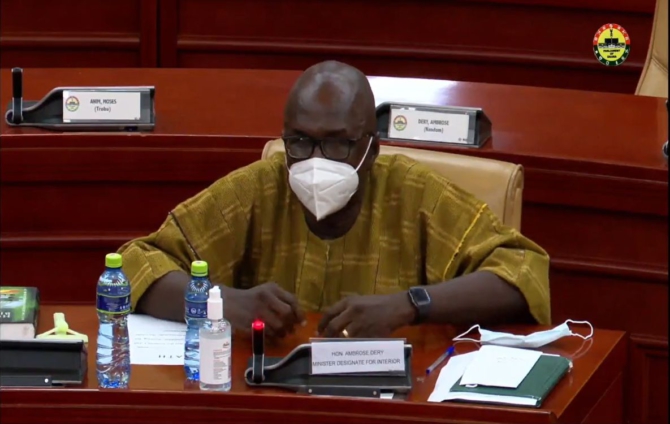 The Minister-designate for Interior, Ambrose Dery has disclosed that government has initiated processes to intensify border patrols following the outbreak of Ebola in Guinea.

According to him, Ghana currently has over 200 unapproved routes along our borders which needs critical attention in order to prevent importation of the disease into the country.

Guinea has so far recorded up to 10 suspected cases of Ebola and 5 people have died since the start of the new outbreak of the deadly virus in the West African nation, medical authorities said on Tuesday.

Guinea’s Health Ministry said it has identified 115 contacts of the known cases in the city of Nzerekore in the country’s south east and 10 in the capital Conakry since the outbreak was confirmed on Sunday.

Unlike the deadliest known outbreak, which tore through West Africa from 2013 to 2016, Guinean authorities have said they are better prepared to stop the spread of the virus.

But responding to a question during his vetting Mr Dery said the Immigration Service together with other security agencies will secure Ghana borders from any such outbreak.

Noting that the outbreak is a matter of concern to government, he told the Appointments Committee that government will ensure the needed resources are provided to officers of the Immigration Service to prevent the outbreak in Ghana.

“We need to work hard to ensure that Ebola doesn’t come here (Ghana). And I am committed to making sure that we protect our borders as much as possible, that is why we are building the Immigration Service’s capacity.”

“But at the end of the day, we still need some technology to help us, and I think that above all we need support from the people. That is why we are building good relations with the people at the border,” he said.

DISCLAIMER: The Views, Comments, Opinions, Contributions and Statements made by Readers and Contributors on this platform do not necessarily represent the views or policy of Multimedia Group Limited.
Tags:
Border patrols
Ebola outbreak
Guinea