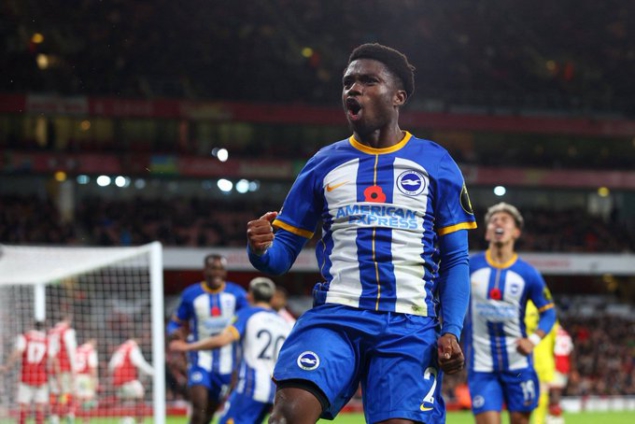 Premier League leaders Arsenal were knocked out of the Carabao Cup as Brighton gained a shock away victory.

Eddie Nketiah had given Arsenal the lead with a curling finish after Reiss Nelson’s run from the halfway line.

Danny Welbeck, who played for the Gunners in the 2018 final, made it 1-1 with a penalty after he had been fouled by debutant home goalkeeper Karl Hein.

Kaoru Mitoma put Brighton ahead after a neat passing move and Tariq Lamptey added a third with a low strike.

The loss in this third-round tie was only the third time in 20 matches in all competitions that Arsenal had been beaten this season.

Mikel Arteta made 10 changes from the 1-0 win at Chelsea and the Gunners looked on course for the last 16 when they took the lead through Nketiah’s excellent 20th-minute strike.

However, their lead only lasted seven minutes.

Hein, a 20-year-old Estonia international goalkeeper who had a loan spell at Reading last season, was making his first senior appearance for the Gunners but brought down Welbeck, who then converted the spot kick.

Arsenal almost retook the lead when Nketiah fired a shot against the post from outside the penalty area with Albert Sambi Lokonga also shooting just wide.

Those misses proved costly as Mitoma got his second goal for Brighton in five days after also scoring in the 3-2 win at Wolves on Saturday, before Lamptey added a third.

On making 10 changes, Arsenal manager Arteta felt it had been the right thing to do.

“I would select the same players if I had the opportunity again,” he said. “There was a big difference between efficiency in both areas and we paid a big price for it.

“It’s a shame for the boys because they really tried and we should have scored two or three in the second half.”

When asked if the result suggests Arsenal need to add to their squad in the January transfer window, Arteta said: “That’s the squad that we have. We have to utilise in the best possible way and today we came short.

“It’s the same squad as when we win. I said from day one that we have a short squad because at the end we left some players. It’s what we have.”

Brighton’s best performance in the EFL Cup came in 1978-79 when they reached the quarter-finals, but this is now the third successive season where they have reached the last 16.

The draw for the next round will take place on Thursday night, following the match between Manchester United and Aston Villa at Old Trafford.

DISCLAIMER: The Views, Comments, Opinions, Contributions and Statements made by Readers and Contributors on this platform do not necessarily represent the views or policy of Multimedia Group Limited.
Tags:
Arsenal
Tariq Lamptey