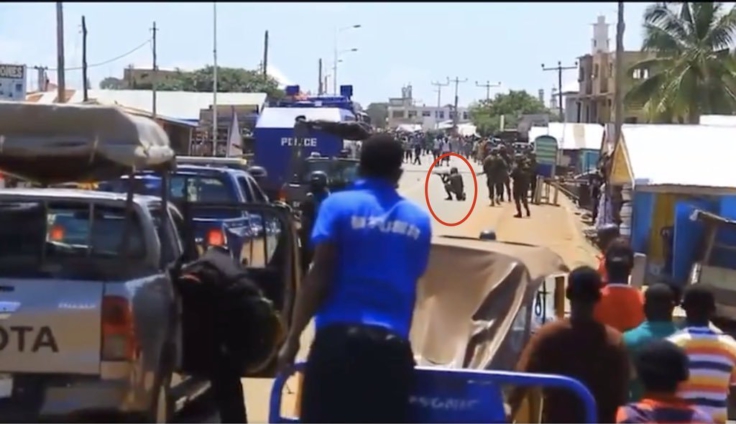 Security analyst Prof. Emmanuel Kwesi Aning says the military is once again being used as a scapegoat for political failures.

This is his reaction to portions of the Ejura Committee report that called for a review of the actions of the Military team led by Lieutenant Martin Opoku Adusei in the Ejura disturbances.

Page 54 of the Committee’s report stated:

“It is further recommended that the military establishment review the actions of the Section on the ground, led by Lieutenant Martin Opoku Adusei, for the inappropriate use of force, and apply appropriate sanctions”.

Speaking on Prime Morning with Benjamin Akakpo on Tuesday, Prof. Aning said the military’s role must be properly understood.

He said the army goes into situations not to resolve conflict but rather to solve a specific problem.

The Ashanti regional town of Ejura witnessed violence in June following the death of social activist, Mohammed Ibrahim, alias Kaaka. Residents poured onto the streets to protest. Military men were deployed by the Regional Minister to deal with the situation.

Two lives were lost, others were left with various injuries. President Akufo-Addo tasked the Interior Minister to allow a committee to probe the matter. The Committee has since issued its report raising issues about how the military used inappropriate force.

He insisted the military is only called in when a situation has gotten out of hand. He, therefore, said criticism that the military shot into the crowd is misplaced. The blame, he argued, should be laid at the doorstep of the delayed intervention.

“The military is being used as a scapegoat for political failures and political security governance decision making”., he argued.

Prof. Aning says this compensation will only be adequate if those who failed in making appropriate decisions are punished.

“You can’t compensate for a loss of life-based on the incompetence and irresponsibility of people who failed to take the decisions they should have taken.

“Probably the first step in compensating those people is to make sure that those who failed to make appropriate decisions are punished”, he said.