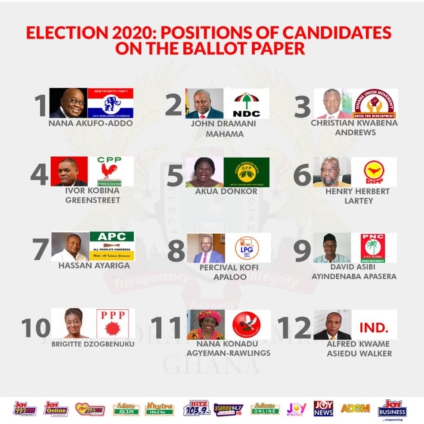 The game is afoot for the final leg of Election 2020 campaign.

Yesterday, October 20, The Electoral Commission balloted for the positions of political parties on the ballot paper for the December polls. Now each political party knows which track they are in for the race to Jubilee House.

In the history of politics and elections in the country, the position of political parties on the ballot paper has been construed as a crucial determining factor in a party’s chance in the election.

The ruling New Patriotic Party and the opposition National Democratic Congress come in 1st and 2nd on the ballot paper.

In Ghana’s multiparty democratic set-up, although only 2 major parties are factored in the decisions and choices of the people, the electoral system leaves room for other contenders.

While some consider it unnecessary, others applaud the inclusion of these smaller parties in the elections as it sometimes provides a healthy distraction during the intense moments of campaigns and especially, the counting of votes on Election Day.

This year’s election is no different.

Twelve political parties made it on the ballot paper after 5 others – 3 parties and 2 independent candidates – were disqualified by the EC from the election process on allegations of forgeries of signatures.

As is stands, the 2 main political parties took the top two positions.

Some may say that is indicative of their duopoly in Ghana’s multiparty democracy. But whichever way you choose to look at it, the political parties themselves have their own theories and conspiracies on their positions on the ballot paper.

After yesterday’s ballot the notable political parties put forward their thoughts and theories on their ballot paper positions.

The theories, conspiracies and prophecies

The New Patriotic Party
The governing party, NPP, secured the #1 spot on the ballot paper.

For party apparatchiks like John Boadu, who is the party’s General Secretary, “Nana Akufo-Addo is number one” and his position on the ballot paper is indicative of the fact that “the party is getting what it wants in terms of votes in the upcoming election”.

He also noted that during “the balloting exercise to determine the order of appearance of the political parties for the main balloting, the NPP picked number four (4)”.

Mr Boadu says that this “is consistent with the party’s 4More4Nana mantra”.

Social media was teeming with theories on the party’s chances in the December polls.

Same shall the results for the 2020 elections be.#4More4Nana

Kwabena Kwabena’s campaign song from 2008 has :

NPP Number 1 on the ballot.

Other conspiracies have woven the National Science and Math Quiz from 12 years ago into the political fabric.

In 2008 when President Akuffo Addo and the NPP were at number 1, they lost oo.

But Sammy Gyamfi, the Communications Officer of the NDC has a completely different take on Nana Addo’s number one position on the ballot paper.

The National Democratic Congress
Number 2 on the ballot paper seems like a win for the NDC, as according to their Deputy General Secretary of NDC, Peter Otokunor, “this is exactly what we were looking for”.

Why? Because they believe, just like Jesus Christ, this heralds the return, or as they put it, the “second coming of John Mahama”.

However, according to NPP’s General Secretary, Mr John Boadu, “NDC’s John Mahama is coming for Round 2 in order to taste his SECOND DEFEAT at the polls Insha Allah”.

An NPP party loyalist Kwaku Brown’s seems to share a similar opinion and has a prophetic declaration concerning the elections.

FACT:
NDC was 8th in order of picking indicating 8years of opposition and number 2 on ballot indicating second time on loosing an election.

Another supposed NDC Youth Wing using the party’s colours say this will be the 2nd defeat of the NDC:

The Convention People’s Party
Ivor Greenstreet did not leave the CPP out of this game. He sees the 4th position of the CPP on the ballot paper as telling of the “4 years of hell” under the top two parties that has ushered the people of Ghana towards “4 years of Heaven” under the CPP’s leadership.

The Progressive People’s Party
At number 10, the PPP believes they are the captain of the team, and also, as the 10 commandments go, they have God’s law and authority on their side.

According to Political marketing strategist and Senior Lecturer at the University of Ghana Business School, Dr Kobby Mensah a party’s position on the ballot paper counts.

“Studies show the position of the ballot matters. When you are in the middle of the pack, there is a tendency that people could play their ballot in between.

“Being at the top of the pack helps because it is at the eye level. Among floaters or middle ground voters, top or bottom of the pack is a preferred choice,” he added.

However, Professor Gyampo, an Associate Professor at the University of Ghana, is unhappy with the number of candidates on our ballot paper. He believes this will only create confusion in the selection process on the day of voting.

“Until political parties in Ghana strive to achieve this, the clearance by the Electoral Commission of as many as 12 candidates to be on our ballot papers will not only create confusion in voter selection during voting but would also amount to a waste of space on the ballot papers,” he added.

How will it end?

At this stage of the “games”, we can only wait for time to tell whether these predictions and prophecies are anything to go by. Or whether the ballot paper will betray the players?

In the case of the NDC, will Ghana have to wait for centuries for the second coming of John Mahama as Christians have of Christ, or will December 7, 2020, be the year of a fulfilled prophecy?

Looking at the permutations and combinations, will the NPP follow the pattern of the 2008 election as has been predicted by some, or will they stay true to their position on the ballot paper?

Just as in Biblical times, there were 12 disciples and only one Messiah, Election 2020 will determine who will be the greatest in the ‘Kingdom’ of Ghana.

DISCLAIMER: The Views, Comments, Opinions, Contributions and Statements made by Readers and Contributors on this platform do not necessarily represent the views or policy of Multimedia Group Limited.
Tags:
Ballot Paper
Electoral Commission
NDC and NPP
Political Opinion