Election 2024: If literates are failing, try illiterates – Kumchacha to Ghanaians 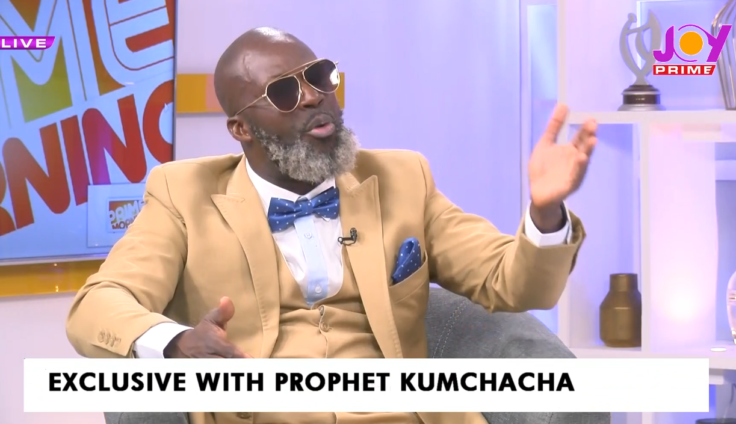 The Founder and Leader of Heaven’s Gate Ministries, Nicholas Osei, popularly known as Prophet Kumchacha, has called on Ghanaians to vote for illiterates in the next presidential and parliamentary elections.

This according to him is because the literates have failed to deliver on their promises over the years.

In an interview with Roselyn Felli on Prime Morning on Monday, he said Ghana, under the 4th Republic, continue to punch below its belt.

According to him, illiterates, including himself, have great vision and can develop Ghana as presidents better than the literates.

Prophet Kumchacha, who is aspiring for the Presidential position in 2024, believes the most relevant things needed for the improvement of the country’s economy are wisdom and knowledge.

“The wisdom and knowledge you have and the vision you’re bringing up are the things that are necessary and will help. It’s not about English,” he said.

He added that “If it was about speaking English, who speaks English better than President Akufo-Addo and his Vice, Dr. Bawumia? They both speak very good English, but the economy is still suffering, and things are still very bad. So if we’ve tried the literates and it’s not working, let’s try the illiterates and see.”

He cautioned the government to stop blaming the Russia-Ukraine war for Ghana’s economic condition, insisting that Ghana is not the only country that has been affected by the crisis.

Speaking on the show, Prophet Kumchacha promised that if elected President of Ghana, he would change the country’s rent control system and make the Ghana Police Service independent.

He, however, refused to reveal his presidential visions and plans, claiming that his ideas will be stolen by other politicians.

He stipulated that announcing one’s visions and plans does not guarantee that Ghanaians will vote for him or her.

“I won’t say all my visions because most of the politicians are thieves. If you disclose your visions, they will steal them. So I will reveal only two. Every human being ‘your secret is your power’. So the rest is my secret, it’s my power,” he stated.

Prophet Kumchacha believes being an authoritative President helps in enforcing laws for the betterment of the country.

Meanwhile, he has expressed his displeasure towards Akufo-Addo and the NPP government. He said he has regretted voting for Akufo-Addo in 2020.

“I thought and hoped he could do the work. I’m disappointed and have regretted voting for him,” he said.

As the founder and leader of Heaven’s Gate Ministries, Prophet Kumchacha revealed his presidential campaign will be financed by himself and not his church members.

DISCLAIMER: The Views, Comments, Opinions, Contributions and Statements made by Readers and Contributors on this platform do not necessarily represent the views or policy of Multimedia Group Limited.
Tags:
Joy Prime
Kumchacha
Prime Morning