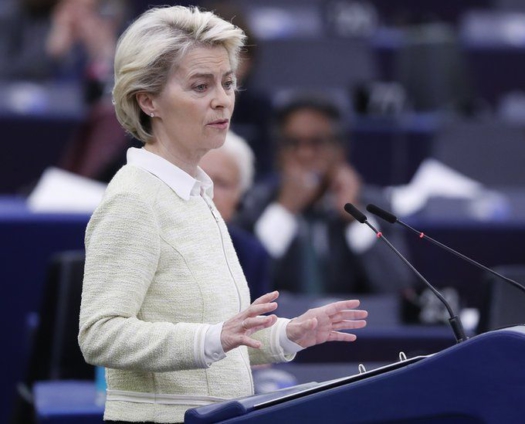 The EU has proposed its toughest measures yet against Russia, including a total ban on oil imports and sanctions on war crimes suspects.

Russian crude oil would be phased out within six months, she said.

“This sends another important signal to all perpetrators of the Kremlin’s war: We know who you are, and you will be held accountable,” Ms von der Leyen told the European Parliament on Wednesday.

The EU has been focusing for weeks on how to wean itself off Russian oil and gas. It has already pledged to reduce gas imports by two-thirds by the end of 2022 and now plans to phase out crude oil over six months and refined products by the end of 2022.

“We will make sure that we phase out Russian oil in an orderly fashion,” the Commission president said.

Slovakia and Hungary, which currently rely on Russian oil, would be given an extra year to find alternative suppliers. A Hungarian government spokesman said they had not yet seen plans or guarantees for a transition.

The package first has to be approved by EU ambassadors and is set to be signed off in the next few days.

Shortly after Russia invaded Ukraine, the EU suspended broadcasts of two networks, RT and Sputnik, that broadcast in English, German and Spanish. It has now targeted three of the biggest Russian state-run broadcasters, by cable, satellite, smartphone or online.

“We have identified these TV channels as mouthpieces that amplify Putin’s lies and propaganda aggressively,” Ms von der Leyen said. Although the three networks were not named, they are thought to include the widely watched Russian-language Rossiya and RTR Planeta channels of state-owned operator VGTRK.

A ban would also be imposed on providing European services to Russian companies through accountants, lawyers and spin-doctors, she said.

Earlier sanctions have already hit Russian banks but the biggest bank of all, Sberbank, has been left off the list because it was considered necessary for paying for Russian gas. Sberbank makes up over a third of Russia’s banking sector and is now set to be removed from the SWIFT global financial messaging system. Two other Russian banks are included in the proposals.

Previous sanctions packages have also targeted a number of individuals linked to the Kremlin and the invasion, and unconfirmed reports suggested the head of the Russian Orthodox Church, Patriarch Kirill, would be on the latest list, along with the family of Kremlin spokesman Dmitry Peskov.

‘We want Ukraine to win’

The Commission president also gave details of plans to help Ukraine tackle the vast costs of the war and the impact on its economy.

Explaining Europe’s “very special responsibility towards Ukraine”, she said Ukraine needed to fund the dramatic fall in its economic output and wider reconstruction.

A recovery package would be drawn up that could tackle weaknesses in the Ukrainian economy and help fight corruption, she said.

“We want Ukraine to win this war, but we also want to set the conditions for Ukraine’s success in the aftermath of the war.”

In a separate move, the EU also promised to increase military aid to neighbouring Moldova, which is under threat from Russian soldiers based in the breakaway Moldova region of Transnistria. “We will continue to deepen our partnership with you to bring your country closer to the EU,” European Council President Charles Michel told Moldova’s pro-EU president, Maia Sandu, in Chisinau.