An attempt to make Facebook founder Mark Zuckerberg step down as the company’s chairman has failed.

At the company’s annual general meeting on Thursday, shareholders had the opportunity to vote on Mr Zuckerberg’s leadership.

Mr Zuckerberg is both Facebook’s chief executive and the chairman of its board of directors.

He controls about 60% of the voting power and would only have lost if he voted against himself.

Some investors have called for him to step down as chairman as they believe this would help him focus on running the company.

One of those investors is Trillium Asset Management, which owns Facebook shares worth about $7m (£5.5m).

“If he can focus on being the CEO, and let somebody else focus on being independent board chair, that would be a much better situation,” Jonas Kron, senior vice-president at Trillium, told the BBC ahead of the vote.

He said Mr Zuckerberg could take inspiration from Google’s Larry Page and Microsoft’s Bill Gates, who are company founders but not chairman of the board. 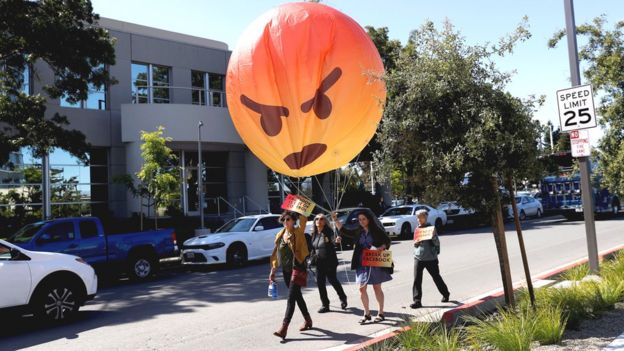 A small group of demonstrators gathered outside the AGM venue

Despite more than a year of privacy and data protection scandals, Facebook has exceeded estimates for revenue growth and continues to add new members.

At the annual general meeting, Mr Zuckerberg declined to answer a shareholder question about why he would not appoint an independent chairman of the board.

According to the Reuters news agency, some shareholders at the AGM said Facebook was a “hostile work environment” for people with conservative views. Some have asked the company to produce a diversity report reflecting its public policy positions.

“There’s a legit[imate] argument that he has too much power,” Mr Stamos told the Collision Conference in Canada in May.

In April, he said: “When you’re building something like Facebook, which is unprecedented in the world, there are things that you’re going to mess up.

“What I think people should hold us accountable for is if we are learning from our mistakes.”