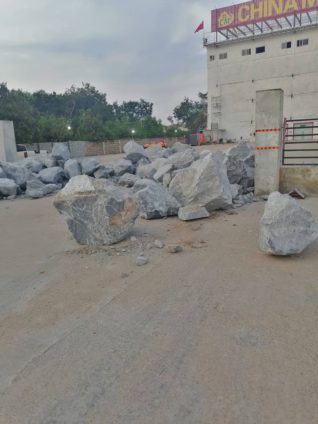 The Weija Divisional Police Command has arrested two persons for blocking the entrance to China Mall located at Weija, with rocks.

The two are 42-year-old James Mensah, who is the Facility Manager of West Hills Mall and Samuel Annum Adjei, a 44-year-old contractor.

Information reaching JoyNews reveals that on Saturday, October 30, the Police at Weija received a distress call at 2am from the security man at China Mall that some persons were there with a dumping truck and were tipping off rocks at the entrance of the China Mall.

The Police immediately moved to the scene and confirmed the report.

The two suspects who were at the scene made an attempt to escape but were napped by the police after a chase.

James Mensah and Samuel Annum are said to have admitted to the offence and have been cautioned.

They are currently in Police custody assisting with investigations.

Meanwhile the rocks have been moved from the entrance to the China Mall. Preliminary investigations suggest that the West Hills Mall is in competition with China Mall.