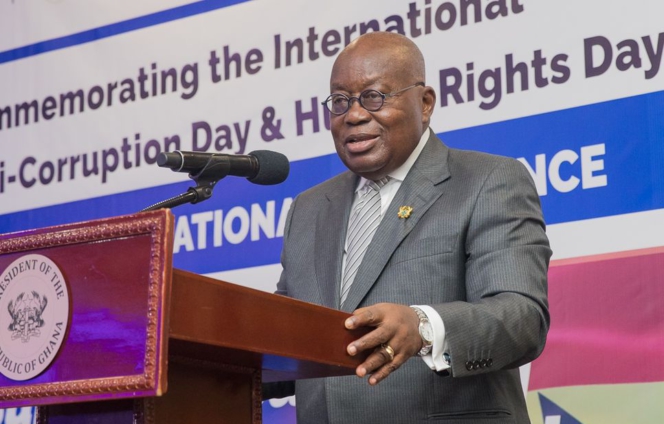 President Akufo-Addo says the Attorney-General, on behalf of the Government, is currently leading the effort to enact a law on the Conduct of Public Officers.

Speaking at the National Anti-Corruption Conference, on Friday, December 10, 2021, President Akufo-Addo noted that “in as much as public officials are required to declare their assets upon taking office, as a tool for fighting corruption, I am, however, of the candid opinion that existing legislation on corruption, relating to the conduct of public officers in Ghana, appears to be inadequate to deal extensively with public office accountability.”

According to the President “The need to lay down a set of far-reaching and a more fit for purpose set of regulations for the conduct of public officers, which will give effect to the provisions of Chapter 24 of the Constitution on Conduct of Public Officers, is, in my view, now self-evident”.

To this end, he revealed that the Attorney-General, over the past four (4) months, has undertaken various stakeholder consultations with a number of public sector organisations, civil society and other interest groups to this end.

When passed into law, President Akufo-Addo indicated that the Conduct of Public Officers Act, will follow the example of legislations in other jurisdictions like the United States Ethics in Government Act of 1978, Public Officers Ethics Act of Kenya, and the U.K. Constitutional and Governance Act of 2010, in addressing issues regarding financial portfolios held by public officers before assuming public office, links to family business, improper enrichment, care of public property, professional practices, property, investments/shareholdings and other assets, self-dealing, partiality in the performance of duties, use of public or confidential information to further private interest, amongst others.

“The Bill provides a gamut of stringent administrative measures and sanctions to deal with violations of the law, ranging from a bar against holding public office for limited and indefinite periods, to penal measures. The Bill also seeks to strengthen the role of CHRAJ in the investigation of allegations of contravention of or non-compliance with the Code of Conduct for Public Officers, including conflict of interest, non-declaration of assets, and illicit enrichment,” the President added.

Updating the Conference about some of the important contributions of the Office of Attorney-General in the detection and prosecution of high-profile corruption cases, as well as in the protection of the public purse, the President acknowledged that the State’s tight purse is very much affected by the award of judgment debts, in various unconscionable transactions.

“The recent example of a financial house, claiming payment of interest of some GH¢1.3 billion, after eleven (11) years, from a transaction involving a meagre two hundred and sixty-eight thousand cedis (GH¢268,000) in 2008, even after the State had already paid some seventy-nine million cedis (GH¢79 million), comes to mind. Through the effort of the Attorney-General, the Supreme Court declared further payment as unlawful, saving the State some two hundred and thirty million dollars (US$230 million),” he said.

He also told the gathering how, on 31st July, 2021, the Attorney-General succeeded in setting aside a judgement debt in excess of US$15.3 million imposed by the High Court, Kumasi in an action arising out of the activities of the erstwhile Inter-Ministerial Committee on Illegal Mining about two years ago.

With regards to prosecution, the President stated that the Office of the Attorney-General and the Economic and Organized Crime Office (EOCO), in addition to the countless cases being prosecuted around the country, have successfully prosecuted a number of high-profile cases, including a case of stealing in Republic vrs. Eugene Baffoe-Bonnie & Others.

“Many other high-profile prosecutions, involving corruption, economic crime, fraud, procurement breaches and money laundering, like the Republic vrs. Alhaji Collins Dauda & 4 Others in the Saglemi Scandal, Republic vrs. Ernest Thompson & Others, Republic vrs. Dr. Kwabena Duffour & Others, Republic vrs. Stephen Opuni & Others are ongoing. It is worthy to note that these cases have, as their sole object, the principle of holding public officers to account, and involve sums in excess of eight hundred and fifty million dollars ($850 million) and two billion cedis (GH₵2 billion),” he added.

DISCLAIMER: The Views, Comments, Opinions, Contributions and Statements made by Readers and Contributors on this platform do not necessarily represent the views or policy of Multimedia Group Limited.
Tags:
AkufoAddo
Corruption
Public officers