FDB is responsible and cares about health of Ghanaians - Official - MyJoyOnline.com

FDB is responsible and cares about health of Ghanaians – Official 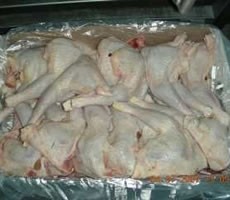 Dr. Mohammed Alpha, an official of the Food and Drugs Board in charge of animal products and bio-safety, has said that the body has the sole aim of protecting the health of the citizenry and not to maliciously ruin businesses as is being portrayed in some sections of the media.

He said the board was very responsible in performing its duties and will not be intimidated by attempts to distract them.

Mr Alpha was speaking in an interview with Joy FM Wednesday on issues related to plans by the FDB to destroy about a 1,000 cartons of what they say is unwholesome poultry products imported by Sucatrade Limited in Tema.

According to the FDB, the chicken parts, stored in the company’s Bulk Cold Storage Facility, are highly contaminated with bacteria and unfit for human consumption.

But Sucatrade, accusing the FDB of being highhanded, said the claims are untrue.

Media publications Wednesday also claimed the FDB did not follow due process in confiscating the products.

The company’s lawyer, Robert Nii Arday Clegg, told Bernard Nasara Saibu on Joy FM’s Super Morning Show that the consignment of chicken was about 250,000 but only a 1000 of it was found to be unwholesome.

He explained that some of the cartons got broken when they were being transported from the ship to the warehouse and so Sucatrade was provided with extra cartons for repackaging.

Mr Clegg said the FDB erroneously generalized the issue to create the impression that the whole consignment of chicken was contaminated while the 1000 cartons under contention only formed 0.4 per cent of the total consignment.

He said the FDB disregarded laws guiding their duties and are insisting on destroying the consignment without producing any lab report.

According to Mr Clegg, section 36 of the Food and Drugs Law mandated officials to provide a warrant when they want to take an action and are prevented from doing so. But he said FDB officials breached that law.

The lawyer further posited that the law mandated officials to perform their duties fairly and without malice.

“I heard Dr Alpha asking you [Bernard] whether under the situation… you are talking about due process. That is the biggest affront to the constitutional order of this country. This country respects due process and I don’t think any power is above it.”

However Dr Alpha, who expressed disappointment in Arday Clegg, said the FDB clearly stated in a press statement that they were dealing with a specific amount of cartons averaging about 1000 and not 250,000.

He said the body was not required to give Sucatrade any lab report before arrangements could be made for the consignment to be destroyed.

“We are going to destroy that product and we will do it,” Alpha maintained, saying: “It is our duty, that is the mandate that Ghanaians have given to us that we should protect them.”

“If we renege on this duty Ghanaians will not forgive us…we don’t have any fear whatsoever when we are carrying out our duties,” he concluded.